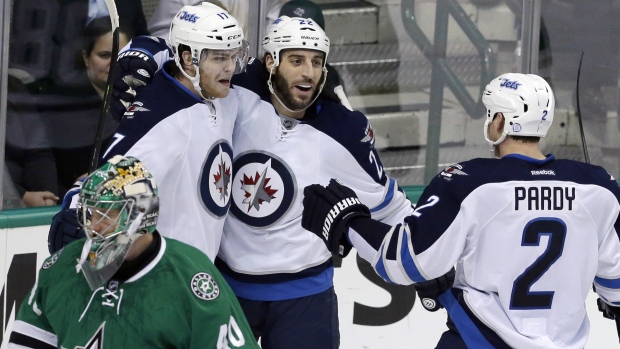 DALLAS - When Winnipeg's Adam Lowry skated in on Dallas goalie Kari Lehtonen in the second period, both players were thinking the same thing: The Jets' rookie was going to pass the puck.

Instead, he whiffed at it.

"I had my blade open," Lowry said. "I was going to try and sauce it to (Mathieu) Perreault back door. But I figured to get the puck on net. I'd be lying if I was saying I was trying to shoot five-hole."

But that's what happened. The puck eluded defenceman Trevor Daley's block attempt, and went between Lehtonen's legs to break a 2-2 tie and the Jets went on to beat the Stars 5-2 Tuesday night.

"I was cheating on thinking that he was going to pass," Lehtonen said.

He had plenty of time to think after the goal at 7:22 of the second period as Dallas coach Lindy Ruff pulled Lehtonen from the game.

Lowry came right back at 9:41 of the second to score again, putting a rebound past backup goalie Jussi Rynnas. The two goals doubled Lowry's season total to four.

Ruff said, "I was hoping Jussi could maybe spark us a little bit."

Wheeler and Frolik each had an assist as well, and Dustin Byfuglien assisted on the Jets' two first-period goals.

Frolik's short-handed goal with 40 seconds remaining in the second period capped the scoring.

Lehtonen stopped 14 of the 17 shots he faced, and Rynnas finished with 13 saves on 15 shots as the Stars dropped to 0-7-3 against Central Division opponents.

"All these games in our division, they will be important throughout the year," Jets coach Paul Maurice said. "There's a lot of points on the line and these are critical games."

The teams exchanged power-play goals in the first period. Perreault scored at 5:23 after Dallas blocked a shot in front of the goal, and the Jets' Bryan Little passed across to Perreault in the right faceoff circle with the right side of the net open.

The Stars tied it at 9:09 as Seguin took a pass from Jason Spezza sent a shot into the net before Hutchinson could get over in time.

Wheeler made it 2-1 with an even-strength goal as he fired a shot from the top of the right circle over Lehtonen's right arm and inside the left post.

Dallas tied it at 3:29 of the second. From a scramble in front, Roussel hit the puck as he was sprawled on the ice and it popped over other players into the net.

NOTES: Lowry had his first multiple-point game. ... Jets LW Evander Kane sat out the first of a two-game suspension for checking-from-behind major and game-misconduct penalties against Anaheim's Clayton Stoner. ... It was Winnipeg's first of two games on the road, where the Jets are 9-4-3. The Jets play at Colorado Thursday. ... Colton Sceviour, in his first full NHL season, skated for the second straight game on Dallas' top line with Seguin and Jamie Benn. ... RW Ales Hemsky was a healthy scratch for the second game in a row. ... The Stars heard boos from the home crowd as they left the ice for the second intermission down 5-2. Dallas had been 4-0-1 in the previous five home games.

(A previous version of this story incorrectly identified one of the teams in the extended headline. The winning team was the Jets, not the Flames.)