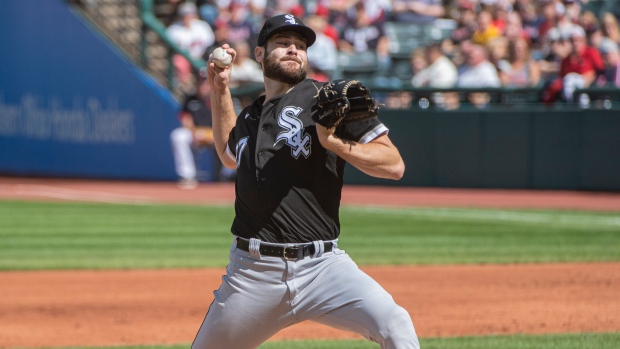 Chicago clinched its first Central title since 2008 by beating the Indians in a doubleheader opener Thursday but is 34-33 since the All-Star break.

The White Sox lost two of three from the Indians after wrapping up the division, including a 6-0 defeat on Saturday. Manager Tony La Russa was happy to see his team respond.

“We had the high of the clinch, and yesterday we were back on our heels,” La Russa said. “We can’t maintain our edge that way. Today you saw everybody out there, a lot of energy, good live actions, making plays, getting base hits. Once in a while you have a game you need to address and we addressed it really well.”

Giolito (11-9) allowed five hits, struck out six and threw 100 pitches. Cleveland advanced only two runners to third base off Giolito, who escaped his biggest threat by retiring Owen Miller with men on first and second to end the sixth.

“I’m pretty heavy on finishing strong and being prepared going into the playoffs,” said Giolito, who will get another start before the postseason. “Trying to put together a good start. I wanted to go at least six innings, so we accomplished those goals today.”

Harold Ramirez homered off Craig Kimbrel in the eighth, but Liam Hendricks pitched the ninth for his 36th save in 42 chances.

García’s double and walks to José Abreu and Grandal loaded the bases in the third. Jiménez lined a single to left.

Grandal’s single put Chicago ahead in the first. García’s single made it 4-0 in the sixth.

Billy Hamilton was credited with a steal of home in the eighth. He led off with a single and took third on Tim Anderson’s single. Anderson broke for second with García batting and got in a rundown. The Indians threw to third when Hamilton inched down the line. Hamilton headed home and slid across the plate to beat third baseman Yu Chang’s throw to Roberto Pérez.

Myles Straw had an RBI single in the seventh off Michael Kopech, but Garrett Crochet got José Ramírez to bounce into an inning-ending double play. Ramirez was ruled safe, which would have scored Óscar Mercado, but the call was overturned after a video review.

“I haven’t seen a double play with Ramírez all year long against us,” La Russa said. “That was a great escape.”

McKenzie, who had shoulder problems while pitching in the minors, has thrown 116 innings during his rookie season.

“This is just kind of part of the growing pains and you learn from it,” interim manager DeMarlo Hale said. "It’s something that we do keep in the back of our mind because we know that this has been a workload that has been a little stronger and higher than previous years.”

Cleveland will play its final home game Monday as the Indians, the team’s nickname since 1915. The team will be called the Cleveland Guardians next season.

President of baseball operations Chris Antonetti doesn’t have a date when the Indians signage outside and inside the ballpark will be removed.

“It is a huge undertaking,” he said. “The specific timeline, I’m actually not quite sure of."

Both teams had a scheduled day off for Monday, but rainouts last week changed those plans. The White Sox play in Detroit while the Indians host Kansas City. The makeup games are necessary because of postponements Sept. 22.

Left-hander Carlos Rodón is tentatively scheduled to start against Cincinnati on Wednesday. He was removed after three innings against Detroit in his last start because he felt soreness in his arm.

La Russa said right-hander Dylan Cease will start the final game of the regular season against Detroit. Cease sustained a large bruise on his right triceps after being hit by Bradley Zimmer’s comebacker Friday.

White Sox: OF Brian Goodwin (lower back spasms) was placed on the 10-day injured list, putting his status for the postseason roster in question.