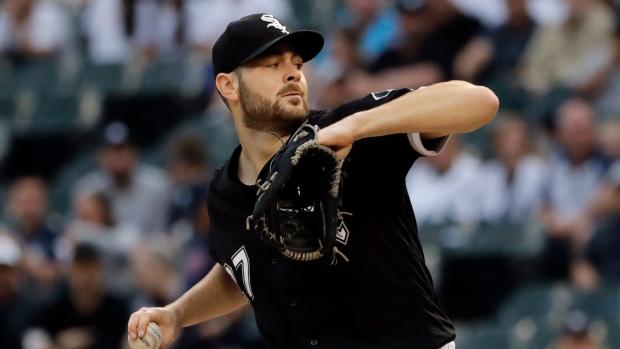 CHICAGO — Lucas Giolito called it a "grinder game." The White Sox simply called it another victory.

Giolito (10-1) gave up a solo homer to Luke Voit in the first, then shut down New York to win his eighth consecutive start. The right-hander gave up one run and four hits in his 11th straight outing without a loss since Seattle beat him on April 6.

"I called it a grinder game," Giolito said after his major league-leading 10th win. "I didn't feel great. There were spurts where I was in sync, everything was coming out right. And then I'd regress. I was a little off. But grinded through it."

He got a huge assist from the White Sox's batters, particularly Jimenez. The prized rookie has five homers in his past six games.

He connected against CC Sabathia (3-4) in a four-run first and drove a rocket to centre against Luis Cessa in the sixth, giving him three multi-homer games this season and two against the Yankees. He hit two in a win at New York on April 12.

Jose Abreu had three hits, scored two runs and drove in one. Yolmer Sanchez added two RBI singles as Chicago won for the fifth time in six games. The White Sox are 34-34, the first time they've been at or above .500 through 68 games since 2012.

Voit hit his 17th homer. But the Yankees lost for the eighth time in 11 games.

"Some nights it's been pitching," manager Aaron Boone said. "Some nights we haven't been able to mount enough offensively. There's been a couple of games where we haven't played clean defence. We've just got to play better overall and do it as a group and when you're doing those kind of things, you start to mount some wins, especially with the people we have in there and what they're capable of."

Giolito is trying to become the first major leaguer to make the All-Star team after finishing with the worst ERA in baseball the previous season, according to STATS LLC.

He went 22 innings without allowing a run before Voit connected in the first. He drove the first pitch he saw to the batter's eye in centre field. But the White Sox responded, with Jimenez delivering the big hits.

Chicago scored four in the bottom half, sending nine batters to the plate. And Giolito did his part as the White Sox pulled away even though he didn't have his best command.

"That's one of the signs of a guy that puts himself in the elite status in terms of starters," manager Rick Renteria said. "You know you're grinding on a particular day, don't feel like you necessarily have your best stuff, and you're able to still go out there and do a nice job of containing and minimizing damage. As we were all watching it, we're all amazed."

Yankees: The Yankees might have their most feared sluggers back in the lineup soon, after Aaron Judge (strained left oblique) joined Giancarlo Stanton (biceps, shoulder, calf) on a rehab assignment with Triple-A Scranton/Wilkes-Barre on Friday. Judge, making his first rehab appearance, went 0 for 4 the designated hitter Friday night in a 16-3 loss at Durham. Stanton started in right field and hit a three-run homer off a building behind the left-field wall after the Yankees transferred him from Class A Tampa to Scranton/Wilkes-Barre. Judge has been sidelined since April 20, while Stanton has not played for the Yankees since March 31. ... LHP Jordan Montgomery threw batting practice Friday for the first time since Tommy John surgery on his left elbow on June 7 last year.

White Sox: INF Yoan Moncada (tight back) was out of the lineup for the third straight game. Renteria hopes to have him back on Saturday or Sunday.

Yankees: RHP Chad Green (1-2, 8.27 ERA) comes out of the bullpen to make his fifth start and 22nd appearance this season.