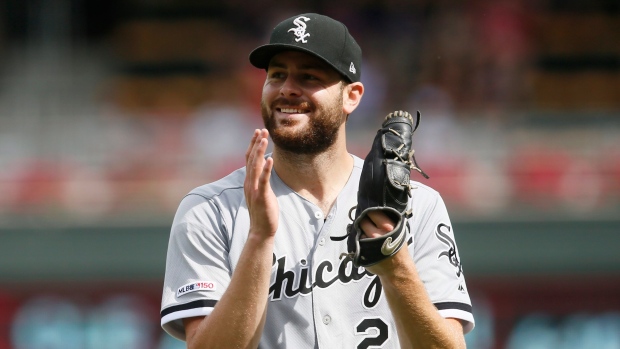 MINNEAPOLIS — The Minnesota Twins have been in first place in the AL Central for all but 13 days this season, a perch the Chicago White Sox have been aiming for during this extended rebuilding project.

If they can make that big jump in 2020, Lucas Giolito will surely be a major factor.

Giolito pitched a three-hit shutout of the second-highest scoring team in the major leagues, racking up 12 strikeouts for the White Sox on Wednesday in a 4-0 victory for their first series win over the Twins in two years.

"He's a tough customer, and he was on his game," Twins manager Rocco Baldelli said. "He pounded the strike zone, but he also has elite stuff, too."

Giolito (14-6) allowed only runner past first base, a double by Jonathan Schoop in the eighth. The 25-year-old fanned Jake Cave to finish that inning and reach double-digit strikeouts for the third straight time, the first White Sox starter to do so since Chris Sale did so in eight consecutive turns in 2015. The last right-hander with a streak that long for the team was Edwin Jackson, with three in a row in 2010.

Giolito also matched Cleveland's Shane Bieber for the major league lead with his third complete game this season, though one was a five-inning, rain-shortened contest against Toronto before he blanked Houston with a four-hit shutout on May 23. Giolito got there this time with a career-high 115 pitches, without a walk.

"If you asked me last year, say you'd throw two complete-game shutouts next season, I don't know if I would have believed it," Giolito said, "but it's the work I put in in the off-season, coming in pitching with confidence every single time."

The Twins beat the White Sox 10-3 on July 25, and Giolito gave up seven hits, seven runs and four homers in five innings in that game. Since then, he's 3-1 with a 2.12 ERA and 53 strikeouts in 34 innings. He said a recent change to his between-starts weight room routine has helped him increase his late-game velocity.

One of the myriad prospects collected by the White Sox during their systematic dump of high-priced veterans, Giolito was one of three players acquired from Washington for outfielder Adam Eaton prior to the 2017 season.

"It was able to allow us replenish our system," manager Rick Renteria said. "Hopefully, we're moving forward in a positive direction just in general."

The Twins were blanked for the third time this year, all at home and also on April 30 by Houston and June 17 by Boston. They took a three-game lead on the Indians in the AL Central into the day. This 13-game stretch entirely against the third-place White Sox and fifth-place Detroit Tigers that began this week looked like a favourable spot on the schedule, but solid starting pitching can make quite the difference.

José Abreu went 3 for 5 with two RBIs for the White Sox from his usual third spot in the lineup, with Leury Garcia and Tim Anderson each producing two hits from their places in front of him. The first three batters scored all four runs against Twins starter Jake Odorizzi (13-6), who was outdone by his fellow American League All-Star.

Though Odorizzi was bested by a bunch of rollers and bloops, with six of eight hits allowed in five innings going for singles, a sign he was not in form was a second wild pitch of the game that let Abreu score with two outs in the fifth. Odorizzi has three wild pitches in two starts after totalling just two over the last two years.

"I might have had the most weak contact I had all season, and the results weren't there to go with it," Odorizzi said. "But that's just how it goes sometimes."

White Sox: 3B Yoan Moncada, out for the last three weeks with a strained right hamstring, went 9 for 22 with two homers, six RBIs and six runs in the first five games of a rehab assignment with Triple-A Charlotte. He's expected to be reinstated from the injured list on Thursday. OF Ryan Cordell was sent down after the game.

Twins: LF Eddie Rosario was removed after the fifth inning as a precaution due to tightness in his right hamstring. "It wasn't like an acute injury or anything that seems to be on the higher end of the serious scale, but even something moderately serious is still something that we're going to spend some time on," Baldelli said.

White Sox: LHP Ross Detwiler (1-3, 6.10 ERA) was announced as the starter for Thursday night, when the White Sox start a four-game series at Texas. Detwiler's last appearance came in relief, a three-inning outing on Sunday. RHP Areil Jurado (6-9, 5.38 ERA) will pitch for the Rangers.

Twins: After an off day, the Twins begin a three-game series against Detroit on Friday night with RHP José Berriós (10-6, 3.37 ERA) on the mound. Berriós has an 8.44 ERA over his last three turns, with 22 hits, eight walks and five homers allowed in 16 innings. The Tigers had yet to declare their starter.