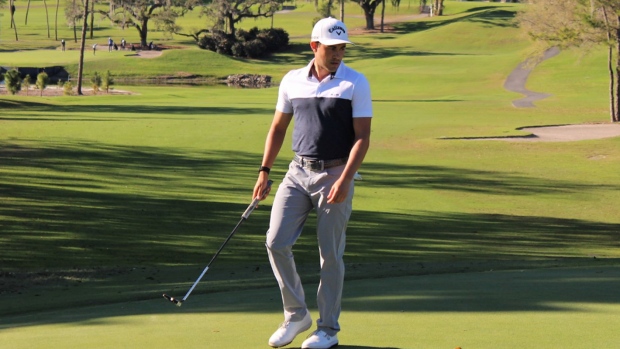 HOWEY-IN-THE-HILLS, Florida—After shooting a 3-under 69 Wednesday in the second round of the Mackenzie Tour – PGA TOUR Canada Qualifying Tournament, Luis Gagne wasn’t too worried about where he sat on the leaderboard. He knew that at 8-under through 36 holes, he would be somewhere near the lead.

When the day ended and the dust settled, Gagne, surprisingly, was in the lead. The Costa Rican, who primarily grew up in the U.S. and attended college at LSU, opened his day at Mission Inn Club and Resort’s El Campeon Course with an eagle on his first hole, No. 10. Gagne took advantage of his opening stretch of holes, making two of his three total birdies that first nine against two bogeys overall to take the 36-hole lead by a stroke over Cristian DiMarco. Isidro Benítez is alone in third, at 6-under, still in solid position to earn one of the cards available to the top-six finishers this week.

Gagne began his day with a flourish by knocking his second-shot approach shot on the par-5 opening hole to eight feet. From there he rolled in the eagle. Although he was 2-under through one hole and only finished at 3-under for the day, Gagne was hardly disappointed when the round concluded.

“If someone told me this morning, I would shoot 3-under, I’d probably sign it.  Especially out here,” Gagne said a few minutes after signing his scorecard. “Of course, you can go back on any round, no matter how good you play, and pick a few shots you wish you did differently, but I’m pretty happy with how I played.”

DiMarco will begin Thursday a stroke behind Gagne after sharing the first-round lead with him, Benítez and amateur Zack Taylor. DiMarco, a resident of nearby Winter Park, shared thoughts about the two nines at El Campeon that were similar to Gagne’s assessment, especially since he quickly moved to 2-under early in his day, like Gagne, starting birdie-birdie.

“It was really a dream start. I couldn’t ask for anything better,” DiMarco said of his opening two holes. The former Mackenzie Tour and PGA TOUR Latinoamérica player has shot a pair of 4-under 33s on holes 10-18 through the first two rounds, the front nine playing considerably harder, as Gagne noted. He’s a cumulative 2-under there.

“When you start on one, you are just trying to get through the front nine and have a few birdies looks on the back. But today was just kind of the opposite,” he said.

The leaders—Gagne, DiMarco and Benitez—will tee off at 1 p.m., off the first tee in the third round.