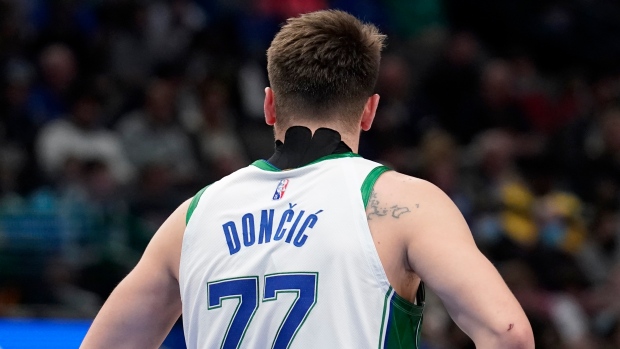 DALLAS (AP) — Luka Doncic had 37 points, 11 rebounds and nine assists and Kristaps Porzingis had 15 points, eight rebounds and a season-best six blocks as the Dallas Mavericks shut down the Memphis Grizzlies to win 104-91 on Sunday night.

The Mavericks never trailed and led by as many as 22 points in winning for the 11th time in their last 13 games. They took the season series 3-1 and pulled within four games of the Southwest Division-leading Grizzlies.

They also held Memphis to within six points of its lowest scoring total — which came in Dallas’ 112-85 road win on Jan. 14 that snapped the Grizzlies’ franchise-best 11-game winning streak.

“Everybody’s involved,” Doncic said of the Mavericks’ defense, which went into the game third in the NBA allowing 102.8 points per game. “Everybody’s helping each other. That’s what we’ve got to do.”

“We couldn’t make a shot tonight,” Grizzlies coach Taylor Jenkins said. “Our defense was there. Just our offense couldn’t get it done.”

Doncic wore elastic therapeutic tape on his neck after taking a hard fall late in Dallas’ loss to Phoenix on Thursday, and often wore a heat pack around his waist while on the bench.

“My neck’s pretty stiff,” said Doncic, who then showed how he struggles to turn his head. “With the therapy, it’s going to get better.”

The Mavericks had a season-high 12 blocks, four more than their previous high, after averaging 3.8 per game coming in. Porzingis fouled out with 6:43 to play, but his six blocks were one short of his career best.

“We know if we don’t come and play with that toughness that they’re going to get us out of the gym,” Dorian Finney-Smith said.

Memphis saw a series of season-worsts in the first half: lowest scoring (34 points), poorest shooting (28%) and worst behind the 3-point line (14.3% on 2 for 14). It was also the lowest-scoring opening half for a Dallas opponent this season.

Grizzlies: The shooting woes negated their usual strengths, outscoring Dallas 60-50 in the paint, 19-9 on fast-break points and 16-5 on second-chance points thanks with 21 offensive rebounds. … Jenkins grew up in Dallas and will visit his high school, St. Mark’s, on Monday. … Forward Brandon Clarke was sidelined by back soreness. … Starting guard Desmond Bane, who played at TCU in nearby Fort Worth, and reserve forward Kyle Anderson missed their third consecutive games while in the NBA’s COVID-19 health and safety protocol.

Mavericks: They finished a five-game homestand 4-1. … Porzingis’ five blocks in the first half matched his season high for a full game. … Guard Sterling Brown missed his third straight game with a sore left foot and guard Frank Ntilikina sat out with a non-COVID illness.

MISSED IT BY THAT MUCH

Doncic went into the fourth quarter with eight assists and added his ninth with 6:23 to play, which was his last of the game. It was the 17th time he has fallen either one rebound or one assist short of a triple-double, of which he has 41 in his four-year NBA career.

“He had the total package, not just the stats,” Mavericks coach Jason Kidd said. “Mentally he was in the right place. He was great tonight.”

Morant scored 28 points in the paint.

“That should tell you if I’m scared or not of who’s at the rim,” he said.

Mavericks: At Golden State on Tuesday; Dallas held the Warriors to season-low score of 82 on Jan. 5.