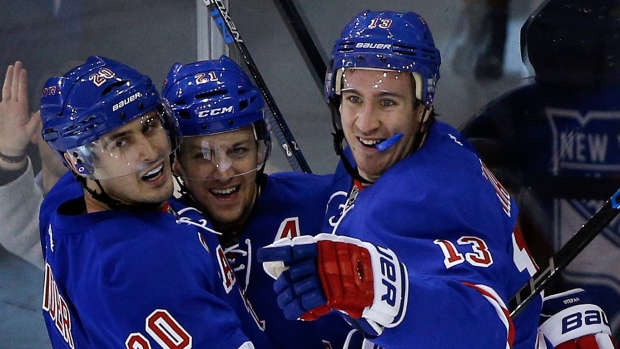 NEW YORK, N.Y. - Derek Stepan and the New York Rangers are well aware who is most responsible for their sensational start.

Henrik Lundqvist made 31 saves in his second shutout of the season and New York beat the Nashville Predators 3-0 Monday night for its ninth straight victory at home.

"Look around the league and you see guys putting up huge offensive numbers, playing great hockey. It's no different (than) what (Lundqvist) is doing for our team," Stepan said. "We've played some good hockey (and) at times we had (Lundqvist) play some good hockey for us."

Stepan, Rick Nash and Kevin Hayes scored for the Rangers, who won for the 11th time in 12 games overall and improved to 16-3-2. New York's 34 points are tied with Dallas and Montreal for most in the NHL.

The shutout was the 57th in regular-season play for Lundqvist and his second against Nashville.

The previous time the Rangers won nine in a row at Madison Square Garden was during the 1971-72 season.

Pekka Rinne made 19 saves for the Predators, who fell to 11-6-3 with their third straight shutout loss.

Nashville hasn't scored in a franchise-record 213 minutes, 47 seconds, since Miikka Salmomaki's goal at 6:13 of the second period in a 3-2 win over Anaheim last Tuesday.

Nashville outshot the Rangers 31-19, including 14-3 in a scoreless first period. The Predators spent 7:21 on the power play, as Dan Girardi (interference), Keith Yandle (holding) and Stepan (double-minor for high-sticking) committed penalties.

Still, the Predators were stymied by an aggressive Lundqvist, who challenged Nashville's shooters throughout.

"He's one of the best goalies in the world," Shea Weber said. "We knew it was going to be a tough night."

Lundqvist's play kept the Rangers in the game, and Nash's sixth goal of the season at 4:32 of the second period gave them the lead.

Nash began the sequence by forcing Calle Jarnkrok into a turnover in the defensive zone. Nash carried the puck up the left wing boards before beating Rinne high to the stick side with a wrist shot for an unassisted goal.

"There's a hole there," Rangers coach Alain Vigneault said. "Only a goal scorer can pick that hole against an elite goaltender."

Nashville had the better of play in the second period, too. The Predators outshot New York 11-4 but were unable to solve Lundqvist.

As strong as New York's netminder was, Kevin Klein made arguably the game's biggest save late in the second period. The defenceman absorbed Filip Forsberg's drive while an out-of-position Lundqvist scrambled to get back into his net with the Rangers clinging to their slim lead.

"I think the guys, when they see guys pay the price like that, it gives the bench energy," Lundqvist said after New York blocked 26 shots. "As a goalie it gives you a lot of energy."

Stepan made it 2-0 at 4:23 of the third. Stationed directly in front of Rinne, Stepan tapped Marc Staal's feed into the net for his sixth of the season.

Hayes added a power-play goal 6:15 later. It was his sixth of the season.

New York finished 1 for 4 on the power play while killing off all five of Nashville's man advantages.

"We took way too many penalties," Staal said. "We started the game off killing almost the whole first half of the (first) period. ... We had to try to get in some lanes and block shots."

NOTES: Vigneault reconfigured his second, third and fourth lines, moving Hayes to right wing on Stepan's line, while J.T. Miller was part of a trio with Jesper Fast and Oscar Lindberg. Viktor Stalberg skated with Jarret Stoll and Dominic Moore on the fourth line. Following the morning skate, Vigneault explained his rationale by saying the Rangers "are just trying to create a different feel," and later added he was "trying to find combinations." ... It was the 500th game of James Neal's career. ... New York scratched Dylan McIlrath and Emerson Etem. Victor Bartley and Anthony Bitetto were Nashville scratches.