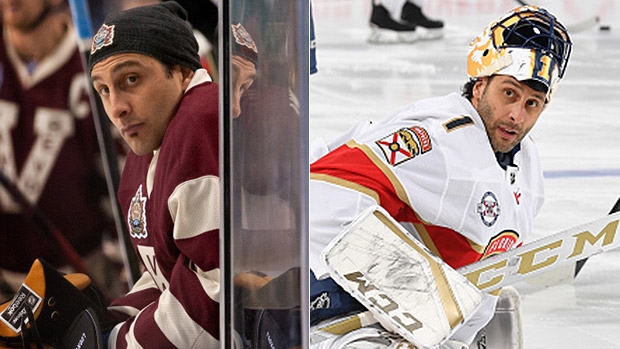 Roberto Luongo has made the decision to retire, drawing a close to a colourful and Hall of Fame-worthy career between the pipes. He steps away after 19 seasons as the third winningest goaltender in NHL history with 489 victories.

Luongo, 40, made the announcement on his Twitter account (@strombone1) on Wednesday – the social media platform where he made legions of fans with his wit and self-deprecating humour.

I’ve decided to take my talents to a South Beach retirement home ✌🏼 pic.twitter.com/BTuZIo8XT8

Luongo made the rare choice to walk away with three years remaining on his contract with the Florida Panthers, foregoing $3.62 million in salary. Playing through lingering hip pain, he could have easily found support from a doctor to say his body was no longer fit for play, leaving him eligible to collect that cash on long-term injured reserve.

His decision will cost the Vancouver Canucks in a big way.

Since the Canucks signed Luongo to a now outlawed back-diving contract in September of 2009 – one in which the salary is significantly frontloaded ­– Vancouver will be hit with just the second (and largest) salary cap recapture penalty in NHL history.

Boom. What a way to go out.

League sources confirmed to TSN that the Canucks will be penalized $3.03 million against the cap for each of the next three seasons. For perspective: that’s almost half of Nathan MacKinnon’s $6.3 million cap hit in Colorado.

The Florida Panthers, who did not enjoy as much of a benefit in cap savings compared to cash, will also be hit with a $1.09 million charge for three seasons.

Canucks GM Jim Benning began preparing for the possibility over the last month. In fact, Vancouver is at least relieved that Luongo didn’t play one or two more years before retiring because the cap penalty would have risen significantly.

The Panthers actually encouraged Luongo to retire instead of seeking a long-term injury exception. For one, the cap penalty is somewhat negligible. Plus, the retirement path saves them $3.6 million in real cash and also reduces the headache of carrying a player on LTIR, which impacts cap flexibility.

There is a certain poetic justice in the way Luongo stuck it to the Canucks. The only better drama would have been for him to spoil the party during the NHL draft last weekend.

In 2011, Luongo brought the Canucks the closest any Canadian team has been to a Stanley Cup since 1993, but he departed Vancouver on poor terms. He clashed with coach John Tortorella after he was chosen not to start the 2014 Heritage Classic outdoor game in Vancouver. He later sought a trade, but the Canucks knew then that there was the risk an early retirement would be a hit on their salary cap.

The cap recapture penalty was a controversial addition to the Collective Bargaining Agreement after the 2013 lockout.

When the Canucks signed Luongo to this 12-year, $64 million deal in 2009, it was in accordance with the CBA. Suddenly, four years after the fact, it was deemed outlawed.

NHL deputy commissioner Bill Daly said last week there was no avenue in the NHL constitution for the Canucks to contest the cap recapture penalty or grieve the cap charge, since it is part of the CBA.

The Los Angeles Kings were the only team previously to be hung with a cap recapture penalty after they terminated Mike Richards’ contract in 2015. Other players with back-diving deals, such as Chris Pronger, Marian Hossa and Henrik Zetterberg escaped by virtue of LTIR. Shea Weber, Zach Parise and Ryan Suter are the only other active players eligible for the penalty.

Luongo’s candidacy for the Hockey Hall of Fame isn’t as a compiler of stats. Yes, he is one of only three goalies to play 1,000 games, in the company of Martin Brodeur and Patrick Roy. He is second all-time in saves (28,409). The two-time second team All-Star also ranks 10th all-time in save percentage (.919).

He was also truly elite for a long period of time. He never won the Vezina Trophy, but was a three-time finalist and finished in the top five on five occasions. More significantly: Luongo was also runner-up for the Hart Trophy in 2006-07, his first season in Vancouver.

He also backstopped Canada to a gold medal on home soil at the 2010 Winter Games in Vancouver, going a perfect 5-0 in the tournament.

But Luongo may be most remembered for his character off the ice. The last goaltender to be named an NHL team’s captain, Luongo wore that 2011 loss in the Stanley Cup Final as tough as anyone.

In Florida, Luongo’s off-the-cuff remarks in February of 2018 as he grabbed the microphone before the Panthers’ first home game following the shooting at Marjory Stoneman Douglas High School in nearby Parkland, Fla., will live forever.

Choking back tears, Luongo mentioned how his children attended the same schools in Parkland. He was on the road with the Panthers then. He was brave enough to speak out when they returned home.

“It was hard for me to be on the West Coast and not be able to protect my family,” Luongo said that night. “No child should ever have to go through that. It’s time for us as a community to take action. Enough is enough. We’ve got to take action.”

Luongo said that night when he was done playing hockey, he wanted to spend the rest of his life in Parkland.