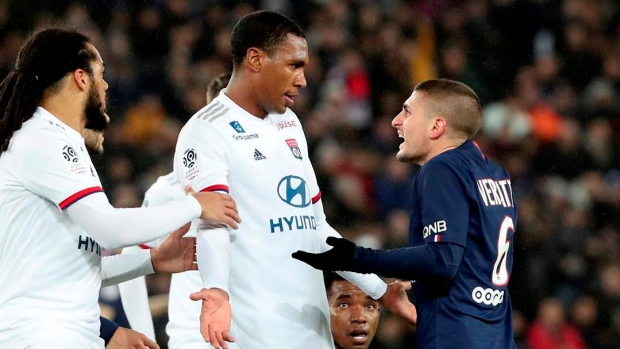 PARIS — Marseille took a big step Sunday toward qualifying for next season's Champions League, winning 2-1 at Lille after another rival Rennes earlier lost 1-0 at Reims.

Second-place Marseille, the only French side to have won the European Cup, moved 11 points ahead of third-place Rennes and 12 clear of Lille in fourth.

Lille would have leapfrogged Rennes with a win but now remains one point behind after relinquishing the lead against Marseille, which won the Champions League final in 1993 against AC Milan.

Marseille goalkeeper Steve Mandanda pumped his fists at the final whistle and was then mobbed by teammates, having made two fine saves from Victor Osimhen and Loïc Rémy early in the match.

Mandanda was beaten by Osimhen's 13th league goal of the season in the 51st minute, however, as the Nigeria striker adroitly clipped the ball over him after latching onto Jonathan Bamba's astute pass.

But shortly after Rémy had a goal disallowed by video replay, for an offside by Osimhen, the home side began to fade and conceded a penalty in the 60th.

With Marseille playmaker Dimitri Payet out injured, midfielder Valentin Rongier elected to take it but his effort was saved by goalkeeper Mike Maignan diving to his left.

Marseille equalized in the 67th when forward Valère Germain met a corner from the right with a glancing header which bounced off defender Reinildo Mandava's head for an own-goal.

Marseille is 10 points behind league leader Paris Saint-Germain, which on Saturday drew 4-4 at Amiens.

Lyon also faltered in its bid for a European place by drawing 1-1 at home to Strasbourg.

Lyon's fourth league match without a win leaves it mired in 11th place and seven points behind Rennes, with the team finishing third reaching the qualifying rounds of the Champions League.

Strasbourg almost scored an injury-time winner against Lyon but defender Alexander Djiku missed an open goal after a free kick hit the post and the ball came his way.

Winger Bertrand Traoré ended a run of 29 league games without scoring to put Lyon ahead in the 21st minute, turning in Maxwel Cornet's cross for his first goal since last March.

Striker Majeed Waris played in Kévin Zohi behind Lyon's defence for the equalizer in the 43rd.

Zohi checked his run, thinking he was offside, before scoring off the post. The goal was ruled offside but validated following video review.

Saint-Étienne is now only two points above the relegation zone after a 3-2 defeat at Brest.

Forwards Denis Bouanga and Loïs Diony replied in the second half for coach Claude Puel's struggling Saint-Étienne side, which slipped to 16th place.

Brest is 13th and seven points above the drop zone.