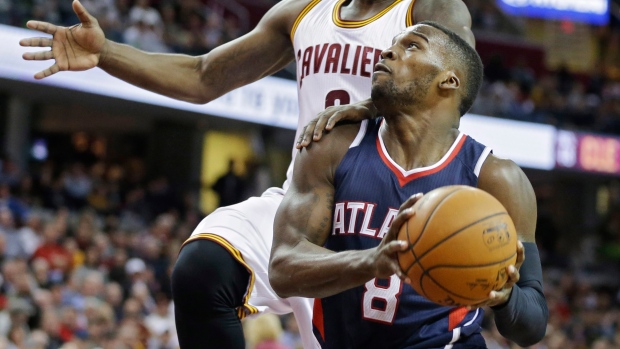 "That was embarrassing, how we played," he said after the Atlanta Hawks routed Cleveland 127-98 on Wednesday night. "I apologize to all the good fans who came out here. Really, just a poor, poor performance."

Shelvin Mack scored a career-high 24 points and the Hawks won for the 11th time in 12 games.

Mack, a reserve guard who came in averaging 3.8 points, made all six of his 3-pointers as the Hawks went 16 for 28 from behind the arc.

Trailing 50-38 midway through the second quarter, Atlanta outscored Cleveland 89-48 the rest of the way. The Hawks, playing without leading scorer Jeff Teague, avenged a 127-94 defeat in Cleveland on Nov. 15.

"We got blown out the first game, like blown all the way out," Mack said. "That wasn't a great feeling. We wanted to come back and see what we're made of."

LeBron James scored 21 points but didn't play in the fourth quarter, which began with Atlanta leading 95-75.

While Blatt said he didn't see any fight in his team, James didn't find the loss embarrassing, but said the team had a setback defensively. The four-time MVP took an analytical approach to the defeat, Cleveland's third in four games since winning eight straight.

"We allowed them to get too many open looks," he said. "This is a well-coached team that we played. It reminds you of playing San Antonio, that system. They move the ball and get you in uncomfortable positions."

Atlanta coach Mike Budenholzer, a longtime Spurs assistant before taking over the Hawks last season, was understandably pleased with the performance.

"It's a great team win," he said. "You go up and down the roster, different guys contributing at different times. That's what we're trying to build, is a team."

Al Horford scored 20 points and Mike Scott added 15 for Atlanta, which had seven players in double figures and shot 64.5 per cent from the field.

The Hawks went 24 for 35 in the first half and continued to slice up Cleveland's defence in the third quarter. Paul Millsap's jumper put them ahead 79-68 at the 6:51 mark, and the lead never got under double digits.

Mack made all five of his 3-point attempts and scored 17 in the quarter. Scott's 3-pointer from two steps behind the arc at the buzzer capped the sequence.

Kevin Love, who missed the morning shootaround because of flu-like symptoms, scored 13 points and had 10 rebounds for Cleveland.

The game began much like the matchup in November, when Cleveland hit all nine of its 3-pointers in the first quarter and began the game 11 for 11 from behind the arc.

The Cavaliers again put on an impressive offensive display in the first quarter Wednesday when they hit 12 of 19 shots with 10 assists. As they did in Monday's win over Charlotte, Love and James hooked up on two highlight-reel plays. Love hit James with two length-of-the-court passes that resulted in layups.

The Hawks defeated Chicago on Monday and followed that with another strong performance, which was even more impressive considering Teague was sidelined. "It's what I'm referencing when I talk about a good team," Budenholzer said. "Somebody's down, we have a lot of confidence in everybody that they can step up and do what we need to win."

Love said he didn't consider not playing despite battling the flu. "I always felt like I was going to play. If I'm feeling up to it, I'm going out there and give it a go." Love played 32 minutes before being pulled early in the fourth.

Hawks: Dennis Schroder started at point guard in place of Teague, who leads the team in points (16.8) and assists (7.0). Schroder had 10 points and 10 assists. ... The game began a tough road stretch for Atlanta. After playing at Houston on Saturday, the Hawks face Dallas on Monday. The three opponents went into Wednesday with a combined record of 50-22.

Cavaliers: G Kyrie Irving, who was 4 for 9 from the field, returned to the court from the locker room after the game to work on his jumper. ... G Mike Miller, who sustained a concussion on Dec. 4, missed his seventh straight game. Blatt said Miller still has some stiffness in his neck area, and decided to hold him out one more game as a precaution.

Hawks: At Houston on Saturday.