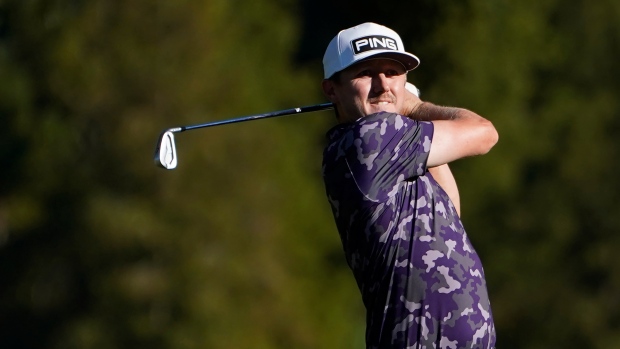 JACKSON, Miss. (AP) — Canada's Mackenzie Hughes thought he had a chance to be picked for the Presidents Cup because of his putting. The strength of his game helped carry him to a 9-under 63 on Friday and a share of the lead in the Sanderson Farms Championship.

Hughes birdied his last two holes at the Country Club of Jackson to catch Thomas Detry of Belgium, who played in the morning and had a second straight 67.

Hughes ended last year at No. 39 in the world, but the Canadian slipped enough this year that he needed to rely on a captain's pick for the Presidents Cup matches in Charlotte, North Carolina, where Hughes now lives.

He was overlooked and Hughes didn't hide the disappointment when asked about it after his round Friday. Trevor Immelman used his last pick on another Canadian, Taylor Pendrith, who missed four months with an injury this summer. Immelman cited Pendrith's power being a good fit for Quail Hollow.

Hughes has been ranked among the top 15 in putting on tour each of the last three years.

“I thought a good putter would have done well in that format,” Hughes said. “But that's not for me to decide if I'm a good fit. I just use it as fuel. I want to have a great season and I'm off to a nice start.

“It hurt, but that’s the way it goes in this game sometimes,” he said. “I’ll work hard to be on that team in two years in Montreal.”

Detry's objective is to be in Rome next year for the Ryder Cup. The 29-year-old from Belgium is a PGA Tour rookie, though he has been seasoned on the European tour and won the World Cup in Australia four years ago with close friend Thomas Pieters.

He also was carried by his putter on the pure greens at the Country Club of Jackson, making three birdie putts of 20 feet or longer in the second round.

“I’ve made only 240 feet of putts the last two days, so that helps,” Detry said. “Although I’ve missed a couple short ones, but that doesn’t matter. I can’t complain about the putter. It’s been really good.”

He also is slightly more rested. Detry was eligible for the Korn Ferry Tour Finals a year ago and chose to stay in Europe, a decision he later regretted. He was eligible again and got his PGA Tour card in the three-tournament series.

But he logged some serious miles along the way.

His card secure, he flew to London for the BMW PGA Championship at Wentworth, the flagship event of the European tour, and then flew across eight time zones for the start of the PGA Tour season in California. He at least had off last week.

Getting his card through the Korn Ferry Tour means Detry won't have access to every tournament, and his priority will change every few months depending on how he fares.

“You obviously don’t get into every single event, so you kind of have to take your chances the first event you get into,” he said. “You have to try to put points on the board as soon as you can, and that’s what I did.”

He tied for fifth at Wentworth and tied for 12th at the Fortinet Championship, and he goes into the weekend in Mississippi tied with Hughes, so it's a solid start.

Straka, the Austrian native who won the Honda Classic this year for his first PGA Tour title, birdied five of his last seven holes. He had a chance to join the co-leaders. He missed a quick 6-footer down the hill on the 17th and a birdie putt from 20 feet on the 18th.

Mark Hubbard (69), Garrick Higgo (66) and Scott Stallings (67) were two shots behind, while Mississippi native Davis Riley managed a 71 in the morning and was in the group three shots behind with Nick Hardy, one of Detry's close friends from their college years at Illinois.

Canadian Nick Taylor stayed put being tied for 10th after a 70 on the day.

Defending champion Sam Burns had a 68 and very much in the mix, just five shots back alongside Adam Svensson of Surrey, B.C., who recorded a 70.

Fellow Canadians Michael Gligic (68) and Adam Hadwin (69) made the cut, while Ben Silverman missed it after going 2-over 74 in the second round.