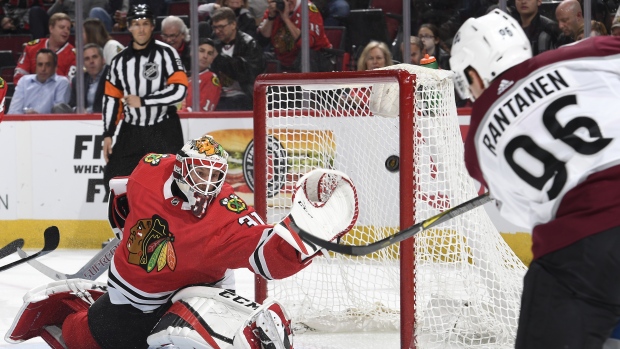 CHICAGO — It's lucky No. 13 for Nathan MacKinnon. Just one of several positive streaks for Colorado at the moment.

MacKinnon had two assists, extending his point streak to a career high-tying 13 games, and the Avalanche beat the Chicago Blackhawks 5-1 on Tuesday night.

Alexander Kerfoot scored twice and Semyon Varlamov made 44 saves as Colorado won for the fifth time in six games and improved to 8-1-3 in their last 12. Mikko Rantanen and Tyson Barrie each had a goal and an assist, and Erik Johnson added an empty-netter.

The Avalanche (40-25-8) snapped a tie with Anaheim for the top spot in the Western Conference wild-card race and moved within two points of Minnesota for third place in the Central Division.

"It's crunch time and I think, not just myself, but everyone is playing really well," said MacKinnon, who has 13 goals and 13 assists during his streak. "We're finding our gear and Varly has been really good, too. If you don't have goaltending, you're not going to win in this league, obviously. He's been awesome."

Chicago (30-35-9) lost for the sixth time in seven games. Defenceman Brent Seabrook scored his fifth goal of the season for the Blackhawks, and Anton Forsberg made 35 stops in his first start since he was pulled in the first period of Thursday night's 6-2 loss at Winnipeg.

The last-place Blackhawks were eliminated from post-season contention with the loss. They had made the playoffs for nine straight seasons, winning three Stanley Cups.

"We had a disappointing second half to the season, to say the least," star forward Patrick Kane said. "It seemed like a lot of the games throughout the year went the way they did tonight: We score first and give up one, lose momentum and can't regain it. Disappointing season? Yep."

Seabrook's power-play goal put Chicago in front with 4:15 left in the first period, but Colorado responded with three in the second.

With Andreas Martinsen in the box for slashing, a wide-open Kerfoot jumped on a rebound and beat Forsberg from the slot at 2:07. Kerfoot snapped a 14-game drought with his 16th of the season.

The Avalanche then grabbed a 2-1 lead on their next shot. MacKinnon drew Forsberg over to one side of the net before playing it across to Rantanen for the easy one-timer at 5:01.

"We're playing with a lot of confidence right now and our top line has been really hot," Kerfoot said. "We know we can score goals and obviously with Varly playing like that, we're a tough team to beat."

Rantanen extended his point streak to seven games. The 21-year-old forward is tied with MacKinnon for most points in the NHL in March with 20 apiece.

Rantanen and MacKinnon each picked up an assist when Barrie scored from the high slot on another power play, making it 3-1 at 12:40. Barrie extended his career-best point streak to 11 games, the longest run for an Avalanche defenceman since the franchise moved to Colorado.

"Barrie's been driving our offence from the back end for quite some time now," coach Jared Bednar said.

Chicago had three more power-play chances in the third, but came up empty each time. Johnson scored from the other end of the ice at 18:04, and Kerfoot made it 5-1 when he beat Forsberg with 57 seconds remaining.

NOTES: Blackhawks C Matthew Highmore was scratched after he went hard into the boards during the second period of Sunday night's loss to St. Louis. Martinsen was recalled on an emergency basis from the minors and put a big hit on Avalanche D Nikita Zadorov in the first period.