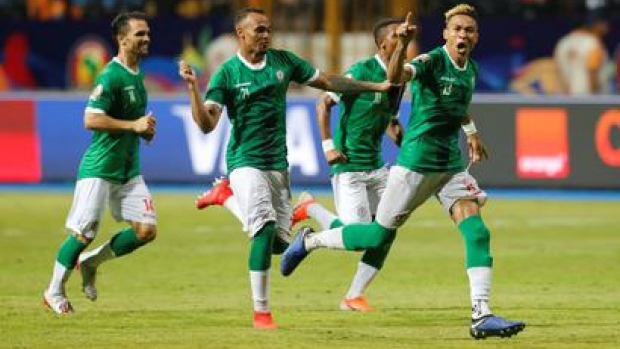 CAIRO — Madagascar beat Congo 4-2 in a penalty shootout Sunday to ensure its fairytale debut at the African Cup of Nations continued as it advanced to the quarterfinals.

Congo defender Chancel Mbemba equalized in the last minute of normal time for 2-2 to send the game into extra time, and neither team could break through to avoid the shootout in Alexandria.

Defender Marcel Tisserand sent Congo's first spot kick well over the bar and Yannick Bolasie also missed when he had to score after Ibrahim Amada, Romain Métanire, Thomas Fontaine and Jérôme Mombris all converted their penalties for Madagascar.

Algeria booked its place in the quarterfinals with a 3-0 win over Guinea, which was missing influential midfielder Naby Keïta through injury.

Goals from Youcef Belaïli in the first half, and Riyad Mahrez — with an impressive finish — and Adam Ounas in the second, set up a game against Mali or Ivory Coast on Thursday.

Madagascar's team, mostly consisting of players plying their trade in the lower leagues in France, had already ensured a dream debut in the tournament after staying unbeaten to finish top of Group B, ahead of former winners Nigeria and Guinea. Madagascar's 2-0 win over Nigeria was one of the biggest surprises in African Cup history.

Amada got the side off to a flying start against Congo when he let fly from outside the penalty area to send the ball in off the far post in the ninth minute, and captain Faneva Andriatsima set off wild celebrations when he cancelled out Cedric Bakambu's first-half equalizer with a diving header in the 77th, only for Mbemba to keep Congo's hopes alive.

Cheered on by the Madagascan president, Andry Rajoelina, and around 450 jubilant fans, Andriatsima's side held its nerve in the shootout to set up a quarterfinal against Ghana or Tunisia on Thursday.