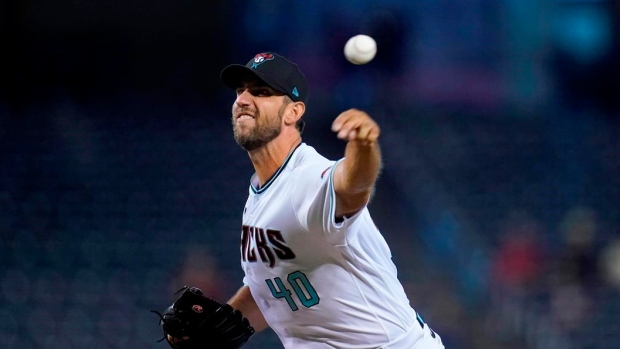 PHOENIX (AP) — Madison Bumgarner's tough two years with the Arizona Diamondbacks have looked nothing like his outstanding 11-year stint with the San Francisco Giants.

But against his former team on Tuesday night, the 32-year-old showed he still might have plenty of good moments on the mound ahead.

“We were moving the ball around good, throwing all four pitches, everything was pretty good tonight,” Bumgarner said.

Bumgarner (6-6) was throwing against the Giants for the second time since joining the Diamondbacks on an $85 million, five-year deal before the 2020 season. The 32-year-old helped San Francisco win three World Series titles in 2010, 2012 and 2014, and he was the 2014 World Series MVP.

A few of Bumgarner's main teammates from his time in San Francisco — catcher Buster Posey and shortstop Brandon Crawford — were out of the lineup. Regardless, the pitcher said he's still not used to seeing the Giants from the other side.

“Just the uniform, the team, the organization, it’s a strange feeling," Bumgarner said.

He hasn't had nearly as much success with the D-backs, though he's pitched better of late, including on Tuesday. The big lefty gave up just six hits and a walk while striking out four.

“Tonight was Bum’s night,” D-backs manager Torey Lovullo said. “Seven real clean innings and he did everything he possibly could to keep a very good team in check."

The Giants scored their only run against Bumgarner on Curt Casali's solo homer in the fifth.

The Diamondbacks jumped ahead 3-0 in the second on Nick Ahmed's RBI double and Cabrera's two-RBI double. Christian Walker and Ahmed each had two hits.

Tyler Clippard handled the ninth for his second save of the season. He allowed a one-out double to Donovan Solano, but struck out Mike Yastrzemski and retired Steven Duggar on a flyout to secure the win.

“Couldn’t have been a better night for us on the mound,” Lovullo said.

Giants manager Gabe Kapler said his team didn't play great, but added that the Diamondbacks did a good job and the Giants' lineup didn't have much of an answer for Bumgarner.

“He hit his spots well,” Kapler said. “Was very aggressive, threw a lot of strikes and that’s important against our lineup.”

A rare play happened in the second when the Giants looked like they were called for a balk.

The weird part was that the perpetrator wasn't Cueto — it was Casali.

Casali blocked a pitch in the dirt and then home plate umpire Chris Guccione ruled that Casali used his mask to stop the ball from rolling, which is not allowed. It was officially ruled an error.

Casali and manager Gabe Kapler briefly argued to no avail, and Kapler said postgame he believed the right call was made. Ahmed and Bumgarner were allowed to advance from first and second to second and third. Both Diamondbacks later scored on Cabrera's double.

Arizona native and Olympic bronze medalist Jagger Eaton threw out the ceremonial first pitch before the game. Eaton took home the bronze in skateboarding in the men's street competition last week in Tokyo.

The Diamondbacks brought Gilbert up from Triple-A Reno and sent LHP Miguel Aguilar back to the minors.

The Diamondbacks will send RHP Zac Gallen (1-5, 4.61 ERA) to the mound on Wednesday for the third of a four-game series. The Giants will counter with All-Star RHP Kevin Gausman (9-5, 2.35).