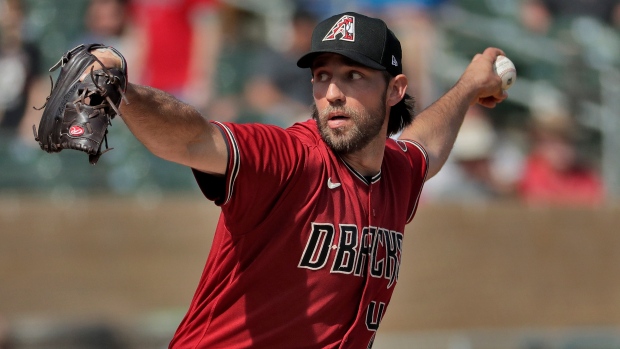 The team's marquee free-agent acquisition of the off-season was solid in his first spring training outing on Thursday. He retired his first five batters, including four on strikeouts, before giving up a solo homer to Derek Dietrich. He allowed one run over two innings.

“I felt good — a lot better than I expected for the first game of spring,” Bumgarner said. “Especially the way it usually goes for me. I was pretty happy with it.”

Bumgarner signed an $85 million, five-year deal in the off-season as the D-backs tried to close the gap in the NL West with the Los Angeles Dodgers, who have won seven straight division titles. He spent his first 11 seasons with the San Francisco Giants, helping the franchise win three World Series titles.

It was also the four-time All-Star's first pitching appearance since The Athletic revealed the pitcher's hobby as a rodeo participant. The 30-year-old has been competing in rodeo events under the alias of Mason Saunders and won $26,560 in a team-roping competition December.

Bumgarner wasn't interested in discussing his surprising side hustle, deflecting several questions about the story.

“Like I said, I felt really good today," Bumgarner said, changing the subject when asked. “Everything felt good and I was happy with where it was at.”

D-backs GM Mike Hazen said this week he was unaware of Bumgarner's rodeo participation when the team signed the lefty but added that it wouldn't have affected his decision. Manager Torey Lovullo called it a non-issue and said he wants his players to have other interests as long as they're smart about their health.

Hazen wouldn't comment on what the team allows the 2014 World Series MVP to do in his spare time or any specifics of the contract or guarantee language. Bumgarner looked healthy on Thursday with a fastball that was in the low 90s and a sharp breaking ball.

“Mixed in everything, threw a few more fastballs than I was originally planning,” Bumgarner said. “I was planning on kind of mixing it up and seeing where everything was at and what I needed to work on. I actually ended up going out there and the fastball felt pretty good, so I wanted to see exactly where it was at.”

Bumgarner was an elite pitchers from 2013-16, finishing in the top 10 of the NL Cy Young Award voting in all four seasons. He injured his shoulder in 2017 in a dirt bike accident and missed three months of the season. He apologized at the time and called it a “stupid” decision that likely violated his contract, though the Giants are not believed to have pressed the issue.

He said wearing a different uniform in a game situation for the first time in the big leagues wasn't a big deal.

“For me, when I'm out there, I just focus on what I'm doing,” Bumgarner said. “I honestly never thought about it one time while I was out there.”