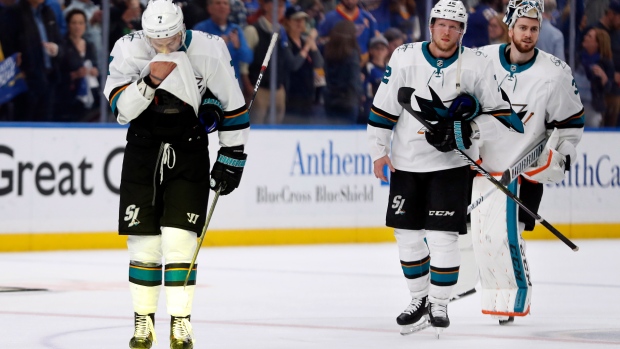 A team depleted by several key injuries ended its season with a 5-1 loss in Game 6 of the Western Conference final Tuesday night, turning the drama of Game 7 wins in the first two rounds into footnotes on a season that was ultimately a disappointment.

"We didn't make it easy for ourselves the whole playoffs," defenceman Brent Burns said. "We always battled back. We got through a lot as a team. A lot of guys just battled. Just to get this far a lot of things have to go right. We battled together but came up short. It's crushing to come this far and not get the job done."

The goal for the Sharks was clear ever since they acquired two-time Norris Trophy winning defenceman Erik Karlsson from Ottawa just before the start of the season. Coach Peter DeBoer told his team the ingredients were in place for that elusive first championship in San Jose. It appeared like that could be the case after the Sharks rallied from three goals down in the third period of Game 7 in the opening round to beat Vegas in overtime and followed that up with another Game 7 win against Colorado in round two.

But with Karlsson unable to play the final four periods of the post-season because of a groin injury that slowed him since January, and captain Joe Pavelski and two-way centre Tomas Hertl also out after taking high hits, the Sharks didn't have enough to handle the Blues.

This season ended like so many others for the Sharks, who have won more games than any other team and the second-most playoff series the past 15 seasons but still are seeking a first championship.

Here are some other takeaways from the season:

JUMBO JOE: One motivating factor for the Sharks this post-season was delivering a title for beloved leader Joe Thornton. The greatest player in franchise history turns 40 in July and has not decided whether he wants to come back for another season. Thornton dealt with injuries early in the season, then had a strong stretch as a third-line centre late before struggling a bit the final two rounds outside of a two-goal performance in Game 3 at St. Louis.

"He's the face, he's the heartbeat of the organization," DeBoer said. "I think like all the players in that room, as coaches we're disappointed for not helping him get there. Because he gives you everything he's got and should be there."

CAPTAIN PAVELSKI: No player personified the Sharks' grueling journey this spring more than Pavelski. His post-season started with a puck that deflected off his face for a goal. The injuries only got worse when his helmet violently crashed to the ice, leading to a bloody concussion in Game 7 against Vegas. That led to the epic comeback with four goals on one disputed major penalty that will go down as the greatest moment in franchise history until the team wins a Cup. Pavelski made a triumphant return in Game 7 of the second round but got hurt again in Game 5 against the Blues. Pavelski turns 35 and heads into an uncertain summer of free agency following a 38-goal season.

KARLSSON'S FUTURE: It was a somewhat disappointing first season in San Jose for Karlsson and now the question is whether it will be his only one. He took about two months to find his groove and then played at an elite level for about six weeks. He hurt his groin in January and was never the same. He missed 27 of the final 33 regular-season games and was never completely healed in the playoffs. He heads into free agency in July and his decision will impact what the Sharks will be able to do with Pavelski and other key pieces.

STEPPING UP: The biggest positive for San Jose this season was the emergence of Hertl and Timo Meier as building blocks for the future. The 25-year-old Hertl was the top-scoring forward for the Sharks with 74 points and showed the capability of manning a top line as a centre. The 22-year-old Meier had 30 goals and looks like a long-time fixture as a top-six forward.

BETWEEN THE PIPES: Martin Jones was one of the worst starting goalies in the league during the regular season in his first year of a $34.5 million, six-year contract. He had a career-low .896 save percentage in the regular season and was pulled early in two of his first four post-season starts. He rebounded and was a key part of the first-round win over Vegas but finished the playoffs with an .898 save percentage.