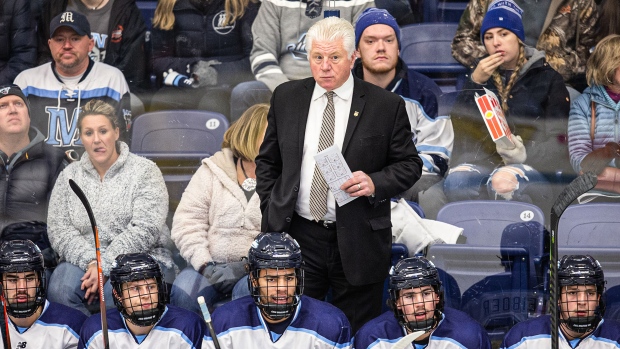 A native of Boston, Gendron had been at the helm of the Black Bears since 2013.

“We are shocked and deeply saddened by Red’s sudden death,” school president Joan Ferrini-Mundy said in a statement. “He was a force in UMaine Athletics and in the legacy of our men’s ice hockey program. We mourn his passing and remember his many contributions to the generations of players he mentored and to the program that lit up Black Bear Nation and the state of Maine. Our thoughts are with his wife Janet, daughters Katelyn and Allison, his coaching staff and players. They have our support and respect for their privacy during this difficult time.”

Gendron previously served as an assistant coach with the New Jersey Devils under Jacques Lemaire and won the 1995 Stanley Cup. He would go on to win two more Stanley Cups as a member of the organization in 2000 and 2003.

He also won a NCAA Championship as an assistant coach with Maine in 1993, with Hockey Hall of Famer Paul Kariya among his players, and another as the associate coach of Yale in 2013.

Gendron's coaching career also took him to the American Hockey League with the Devils' affiliate Albany River Rats and the Indiana Ice of the United States Hockey League.

Internationally, Gendron was an assistant coach on three different United States entries at the World Junior Hockey Championship in 1993, 2001 and 2002.