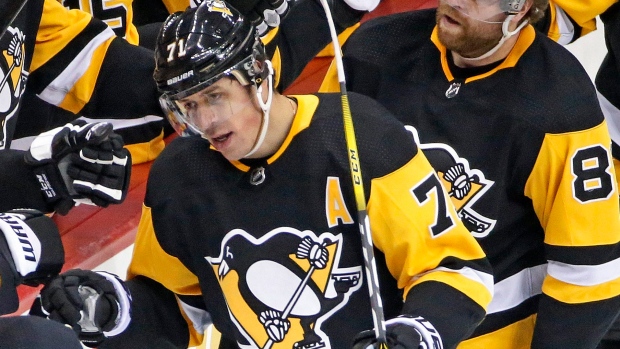 WASHINGTON — Injured star Evgeni Malkin was out of the Pittsburgh Penguins' lineup for Game 2 of their second-round series against the Washington Capitals.

Coach Mike Sullivan confirmed about two hours before Sunday's puck drop that Malkin was out for the third consecutive game. Malkin appeared to injure his left leg in Game 5 of Pittsburgh's first-round series against Philadelphia and has not played since.

"We're a better team when Geno's in our lineup," Sullivan said. "Having said that, I don't think our team looks for any sort of excuses. I think we try to rally around one another. It's a next-man-up attitude, we have capable people in our lineup, it provides opportunities for others to play a more significant role and they want to take advantage of those opportunities."

Malkin's continued absence affords a bigger role for centres Derick Brassard and Riley Sheahan, and, combined with an upper-body injury to Carl Hagelin, keeps Carter Rowney and Dominik Simon in the lineup. On Saturday, it looked like Malkin could be ready to return; he participated in a full practice, skating on the fourth line and taking turns on the top power-play unit.

But Sullivan and Malkin both said the 31-year-old Russian would play only if he was ready from the first shift and was not limited to a minor role. Sullivan said Malkin did not experience a setback and could return for Game 3 in Pittsburgh on Tuesday.

"It doesn't matter who's in the game. You just did need to win the game," Washington coach Barry Trotz said. "Obviously he's a top player. There's no question about it. It's undeniable. But at the same time, it doesn't really matter."

Malkin had three goals and two assists in five first-round games. Without him, the Penguins eliminate the Flyers in Game 6 a week ago and erased a two-goal deficit Thursday to take a 1-0 series lead on the Capitals.

The potent Penguins power play misses an important piece without Malkin, though it only got two opportunities for a total of 2:32 in Game 1.

"It was limited time, so it's hard to evaluate whether or not we were able to have success, with or without him," Sullivan said. "We have capable guys. The people we have are very capable of being successful. We just have to find ways to have success if given the opportunity."