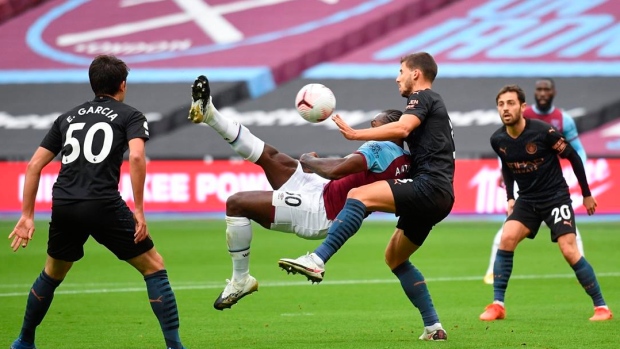 LONDON — Such are Manchester City's struggles, not even a trip to West Ham can be relied on anymore to rack up the goals — and points.

A 1-1 draw on Saturday left City enduring its worst start to a season in six years — before Pep Guardiola arrived — and the manager facing more doubts about his ability to regain the Premier League trophy in the final year of his contract.

How different from the last five games at the Olympic Stadium when City scored 22 goals and only conceded once. This latest setback left City with only eight points from five games.

And the point was only rescued by substitute Phil Foden’s second-half strike, after bringing down João Cancelo’s cross on the turn.

“It’s not a good point," Foden said. “We wanted three but we’re not a team who will sulk a lot. We’ll get over it tomorrow, look at things we can improve on and go ahead.”

Going ahead, in the Champions League on Wednesday at Marseille, they could be without Sergio Aguero. Foden replaced Aguero at halftime and, concerningly for Guardiola, the striker is facing another spell on the sidelines with Gabriel Jesus also out injured.

Goalkeeper Lukasz Fabianski denied Raheem Sterling and Riyad Mahrez the chance to grab a winner in east London as West Ham's resurgence continued after opening the season with back to back wins.

“In the second half they defended so deep," Guardiola said, "and then we had chances at the end to score and we could not convert.”

Fresh from grabbing a draw at Tottenham on Sunday, West Ham took the lead through Michail Antonio’s overhead kick in the 18th minute.

“We started slow," Foden said. “We weren’t passing quick enough around the back and didn’t have a good tempo.”

Despite conceding six minutes into the second half, West Ham largely managed to nullify the City threat as David Moyes' team also moved onto eight points.

“We’ve been in fantastic form recently, and I thought in the first half we were excellent,” West Ham midfielder Declan Rice said. "It shows we are building something. The manager has been brilliant. I think we’ve found a formation that suits our players.

Fans, though, remain excluded from the game — as all English stadiums remain closed due to coronavirus restrictions. The closest supporters could get to watching the game in large numbers was in a cinema in the shopping mall adjacent to the stadium.