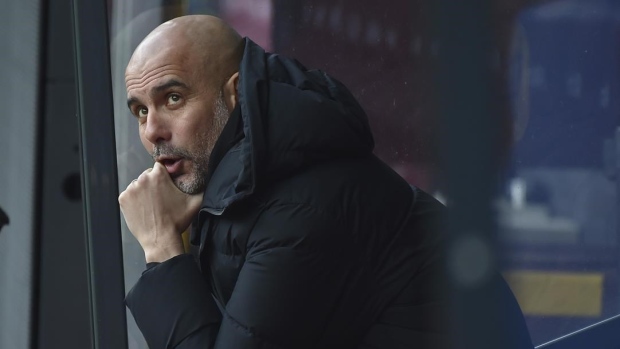 A defiant Pep Guardiola insists that Manchester City's late capitulation in the second leg of their Champions League semi-final tie against Real Madrid at the Bernabeu doesn't mean failure.

"If people say it's a failure then I disagree," Guardiola said ahead of the Premier League leaders' visit from Newcastle on Sunday.

Carrying a 4-3 lead on aggregate from the first leg at the Etihad, City held a 1-0 lead over Real and appeared to be on course for a second straight appearance in the Champions League Final, but two goals from Rodrygo in the 90th and 91st and a Karim Benzema penalty in extra time meant that City would fall 6-5 on aggregate.

Guardiola says that while his players are obviously disappointed, it won't be a setback.

"The people in the squad know how difficult it is, but they accept it," Guardiola said. "I'm not going to make a debate. In the club the feeling we have is we try to do it again. We are sad, of course, because we were close - but not close enough. Madrid deserve it. The players wanted to play the final, but for this club to compete against Real the way we did is a joy. I say congratulations to Liverpool and Madrid, they deserve it. Next season we try again and, if it doesn't work, we try again."

One point clear of Liverpool atop the table with four matches remaining and looking to win their third Premier League crown in four seasons, Guardiola says the focus is on the future and not what happened on Wednesday.

"No words can help what we feel," said Guardiola. "It's a question of time, we try to sleep and think of the targets. We will be together on Saturday, so we will talk about who we are as a team and what we've done to get to the semi-finals of the Champions League. We can't compare what happened in the past to what will happen in the future. The best form of concentration is simple: Newcastle. No more than that."