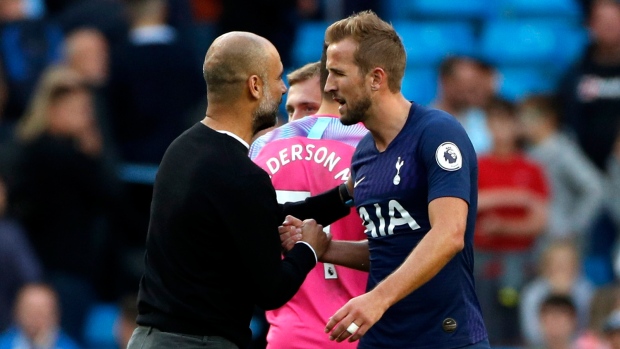 MANCHESTER, England — Gabriel Jesus was denied an injury-time winner by an intervention from the video assistant referee as Manchester City had to settle for 2-2 with Tottenham in the English Premier League on Saturday.

The Brazil striker looked to have claimed victory for City following a corner in the second minute of stoppage time but his strike was ruled out for a handball by Aymeric Laporte as the defender stretched to reach the ball with his head.

The scenes as the goal was chalked off were reminiscent of the dramatic ending to last season's Champions League quarterfinal second leg between the sides at the same stadium last season. On that occasion, Raheem Sterling had a goal disallowed for offside by VAR in the third minute of injury time, which ultimately denied City a place in the semifinals.

"Déjà vu," City manager Pep Guardiola said. "It's the second time. It's tough. But it is what it is."

The latest VAR ruling made the result all the more frustrating for City, which dominated the match and racked up 30 shots to the visitors' three.

In another incident in what proved to be an action-packed match, Guardiola appeared to take out his frustration on star striker Sergio Aguero, having angry words as he substituted him after the hour. The pair later appeared to make up.

City twice led after Kevin De Bruyne created goals for Sterling in the 20th and Aguero in the 35th with pinpoint crosses. However, they were cancelled out by Erik Lamela's curling shot in the 23rd and, with his first touch as a substitute, Lucas Moura. The Brazilian had been on the field for only 14 seconds when he glanced home a header at a corner.

It was a point Spurs will be happy to take as, despite having Christian Eriksen back in their side, they were outplayed.

Tottenham and City are on four points, two behind Liverpool and Arsenal.