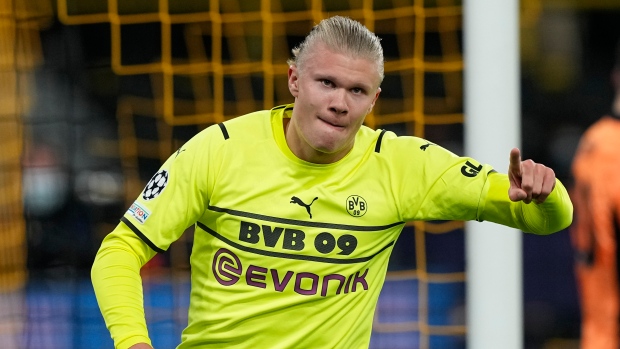 Manchester City's pursuit of Erling Haaland is at the finish line.

The club announced on Tuesday an agreement in principle with Borussia Dortmund for the 21-year-old Norway striker with the transfer subject to coming to terms with the player.

Manchester City can confirm that we have reached an agreement in principle with Borussia Dortmund for the transfer of striker Erling Haaland to the Club on 1st July 2022.

The transfer remains subject to the Club finalising terms with the player.

Fabrizio Romano reports that Haaland's release clause is actually closer to €60 million than the widely reported €75 million. The Italian notes that Haaland's salary is believed to come in at €375,000 a week, equal to the club's current top earner Kevin De Bruyne.

Erling Haaland to Manchester City, here we go! Haaland has passed medical tests as new Man City player today, he’s back in Dortmund. It will be OFFICIAL this week 🚨🔵 #MCFC

Man City told BVB board that they will activate release clause [closer to €60m than €75m] in few hours. pic.twitter.com/heYobi8S1Y

Haaland now follows in the footsteps of his father, Alfie Haaland, who spent three seasons at City from 2000 to 2003.

The younger Haaland has spent the past three seasons at Dortmund, scoring 85 goals in 88 appearances across all competitions.