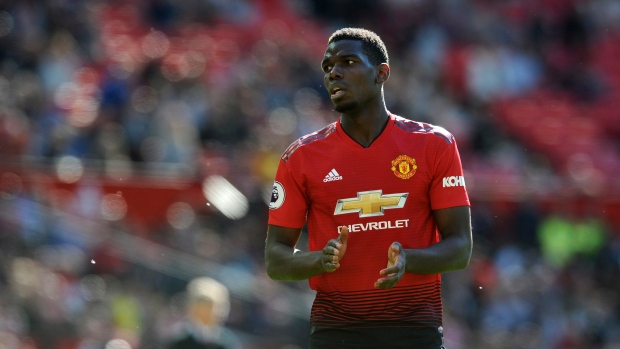 PERTH, Australia — France midfielder Paul Pogba's future with Manchester United was in the spotlight as the team arrived in Perth for a 10-day visit that includes two friendlies, a corporate golf day and a soccer clinic with disadvantaged children.

The English Premier League team plays its first match on Saturday against the A-League's Perth Glory. On July 17, Leeds United will be the opposition at the same Perth Stadium.

Pogba, who is considering a move from Manchester United, likely to Real Madrid or Juventus, was among the players despite speculation that he might not make the trip to Australia.

Pogba said last month in Tokyo that he feels ready for a change.

"For me, you know I've been here for three years in Manchester, it's been great," he said then. "(But) I think for me it can be a good time to have a new challenge somewhere else."

Pogba has two more years remaining on his United contract.

On Tuesday, Pogba's agent Mino Raiola told London-based TalkSPORT radio that he is hopeful that Pogba will soon be allowed to leave Manchester United.

"The player (Pogba) has done nothing wrong," Raiola said. "He has been respectful and professional in every way and always.

"The club has known his feeling for a long time. Hopefully there will be soon a satisfying solution for all parties."

United's Twitter feed showed players signing autographs at the airport and others walking around the Western Australia state capital.

State government officials, who said they expect about 20,000 fans to come to Perth for the matches, said the team will also participate in a training session in front of about 14,000 fans, attend a dinner at the stadium and appear at other corporate functions.

Premier Mark McGowan said most of the tourists expected in the city are from Britain.

"They won't just watch the soccer. They'll go shopping, they'll go to restaurants, they may well have a holiday around WA," McGowan said.

He would not disclose what the state government paid to bring the team to the city.

"You don't reveal what you bid or what you pay because then you give a competitive advantage to your competitors when you bid for something else," he said. "So these things are always kept relatively secret."