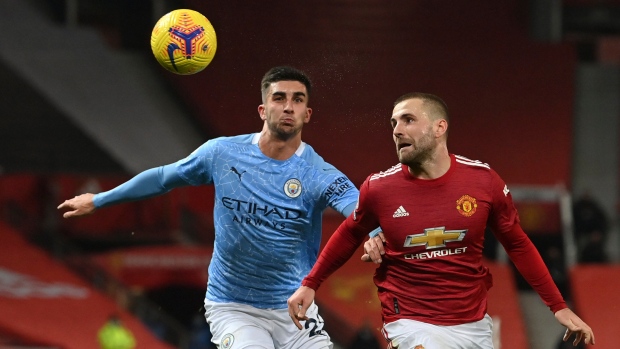 Manchester United was forced into damage control on Monday after left-back Luke Shaw's explosive comments that referee Stuart Attwell told captain Harry Maguire that he couldn't give the Red Devils a penalty during Sunday's 0-0 draw with Chelsea because "it would cause a lot of talk after."

The club tells Sky Sports that Shaw simply misheard Maguire and such an admission from the referee never came.

The issue at hand occurred in the first half of the match at Stamford Bridge. With United's Mason Greenwood in the Chelsea area trying to bring down the ball Callum Hudson-Odoi of the Blues attempting to clear it, the ball struck the Chelsea player's hand as it was shoulder-level with Greenwood. Attwell went to VAR, but did not award the penalty.

After the match, Shaw claimed that Attwell did see it as a penalty, but was too afraid of potential blowback to award one.

"I don't know why they stopped [the game] if it wasn't going to be a pen," Shaw said. "The ref even said to H[arry Maguire], I heard him that 'if I say it is a pen, then it is going to cause a lot of talk about it after', so I don't know what happened there. H said that they got told it was a pen. He got told it was a penalty by VAR so I'm not sure what's gone on. I don't understand why he's stopped. If he's going to stop, you would think maybe he is going to give a pen, because we had the ball. We were attacking."

For his part, United manager Ole Gunnar Solskjaer believed his club should have been given a spot-kick.

"It was a penalty," the Norwegian said. "I'm a bit concerned we don't get those penalties after noises were made about us getting penalties."

Both Chelsea and United have been awarded eight penalties this season, two fewer than league leaders Leicester City.