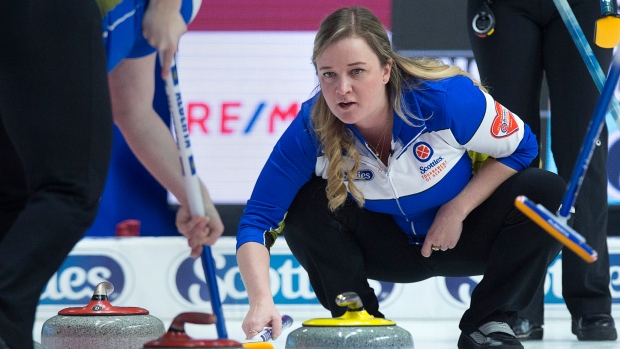 SYDNEY, N.S. — Alberta's Chelsea Carey is the lone unbeaten skip after Tuesday's play at the Scotties Tournament of Hearts. She beat Nunavut's Jenine Bodner 10-5 in the morning and topped Ontario's Rachel Homan 6-3 in the evening to move to 6-0 in Pool A at the event.

"We were able to stay nice and calm and loose, and managed to pull it off," Carey said.

Kerry Galusha used to take close losses in stride when she came up short against top teams at the Scotties Tournament of Hearts.

Things are different this year. Galusha feels her team has more potential this time around.

And the Northwest Territories skip has been getting downright mad at times if an opportunity to win is missed.

"That wouldn't be an emotion that I used to feel," Galusha said. "It's definitely a different Scotties this year for sure. I think people are taking note."

Galusha is a solid 3-2 after 11 draws of play at Centre 200. She nearly pushed Team Wild Card's Casey Scheidegger to an extra end in a 6-5 loss on Tuesday afternoon.

Her other defeat was a 7-4 decision to Jennifer Jones on Sunday, a loss that left Galusha seething because she felt she was a half-inch away from preventing Canada's decisive three-point ninth end.

"They were really mad after, which to me, I actually like that," said team coach John Epping. "That means that they really care and they really believe that they can be a contender at the end of the week."

Galusha was tied with Jones and Saskatchewan's Robyn Silvernagle in third place behind Scheidegger and Prince Edward Island's Suzanne Birt, who were 4-1.

Birt outscored New Brunswick's Andrea Crawford 13-12 in an extra end. It was the highest-scoring game in Scotties history.

Jones ended a two-game skid with a 9-7 win over Yukon's Nicole Baldwin while Silvernagle posted an 8-4 victory over Kelli Sharpe of Newfoundland and Labrador.

Galusha said her team was a little off in Tuesday's defeat, with a chance for a deuce denied when her final stone came in heavy in the 10th end.

Her Yellowknife rink will close the preliminary round Wednesday with games against P.E.I. and Yukon.

Epping said the team is capable of making the top four in Pool B to get into the championship pool, adding they have a shot to reach their goal of an 8-3 record.

"Some people say maybe that's a bit too high," he said. "But I think they can. They gave Wild Card a great game today, they've given (Jones) a great game with Team Canada. So we have opportunities for sure."

Galusha decided changes were necessary after a 2-6 showing at last year's Scotties.

"I had an awful time last year," she said. "I was like, 'I'm not going to do that again.' So let's change things up. We added Brittany (Tran) on at second, who has been a huge asset to us. Let's travel more, let's put in the time.

"This is the most open and honest team I've ever been on and it seems to have really worked. It's just a totally different feeling."

"We were looking at the (ranking) points," Galusha said. "We never look at points. We're never up there to look at points. It was really fun to win money and being in the mix of things."

The team currently sits 34th in the Canadian rankings.

"That (title) just gave them a big boost and you can tell that here," Epping said. "It's definitely a different team with much higher expectations. They're ticked off when they lose instead of being, 'That's OK.'"

Galusha, 41, is making her 16th career Scotties appearance and fifth in a row. She has never had a winning record at this event, but that could change this year.

"It's very different," Galusha said. "We have the team that can be there at the end of the week."

The championship round starts Thursday. The Page playoffs begin Saturday and the final is set for Sunday.