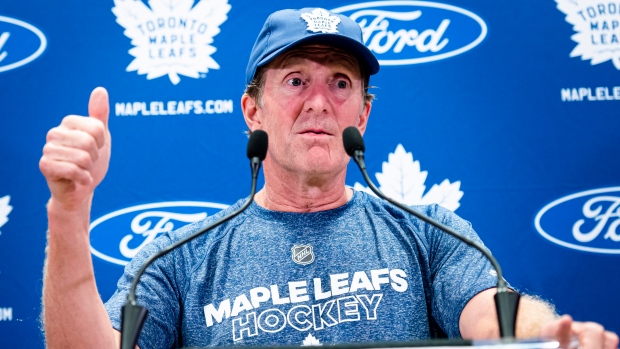 TORONTO – Before the Maple Leafs could move on from their abysmal 7-3 walloping by Tampa Bay on Thursday night, the team gathered for a meeting Friday morning that head coach Mike Babcock deemed more important than any practice to hash out what’s gone wrong during a three-game winless streak.

“It’s just a family discussion; it’s just honest,” Babcock said following the Leafs’ on-ice session Friday. “The reality is we weren’t good enough [against Tampa] and we showed the areas we weren't good enough. There’s nowhere to hide here. In any good family, that’s what it’s like. You keep each other accountable and that's what we try to do.”

Babcock accepted his share of the blame for a defeat that saw his team let a competitive first period devolve into a lacklustre finish. The Leafs trailed 4-3 after a wild opening 20 minutes against Tampa, and were well-positioned to bounce back in the second until their offence stalled and defensive errors piled up.

Leafs are back!  Get access to livestream games, news, highlights & analysis with TSN Direct – the exclusive streaming service from TSN. Subscribe Now >

“Any time you play like we did last night, the coach didn’t do his job. So we weren't ready to go,” Babcock said. “We were up 2-1 with eight minutes left in the first period, but we didn’t stay playing. We got rattled. We didn't keep digging in. We weren’t good enough. So then [the accountability] goes to your leadership group, then it goes to everybody else, and we're all involved.”

While the loss to Tampa was the Leafs third in a row and second straight in regulation, Babcock appeared most frustrated that his team was trounced after playing what he called its best game of the season on Monday, narrowly falling 3-2 to the defending Stanley Cup champion St. Louis Blues.

In that outing, the Leafs dominated puck possession at 62 per cent and outchanced the Blues 34-18. Their effort against Tampa, especially through an awful third period where they registered just four scoring chances and Frederik Andersen was pulled after giving up a seventh goal on 28 shots, was tough for Babcock to swallow.

“Maybe we were feeling so good about the way we played against St. Louis we forgot to play last night,” he said. “The bottom line is our defensive numbers are real good so far this season. We’re happy with that. Last night we weren't good enough. We made some mistakes and it ended up in our net, but we gave up chances like we don't normally give up. So that’s the biggest concern.”

Adding to some of the early season struggles for Toronto has been working in new bodies on the blueline. Cody Ceci and Tyson Barrie arrived via off-season trades, from Ottawa and Colorado respectively, and were expected to turn the Leafs’ top four into a more consistent, and more dangerous, group than years past.

The newcomers are still getting up to speed on the new system five games into the season, but Barrie wasn’t willing to blame inexperience for what transpired against Tampa.

“I think it's pretty simple. If you know what you’re doing and you work hard and do your job, we’re going to be successful. Obviously, last night, I don’t think we executed,” Barrie said. “They outworked us in our own building and kind of embarrassed us a little bit. It shouldn’t have gotten to that. We needed to come out and play a lot harder than we did right off the hop and it’s disappointing we didn’t.”

Barrie pointed out that just because Toronto boasts names like Auston Matthews, Mitch Marner, John Tavares and William Nylander among its forwards doesn’t mean it can rely on offensive skill alone to win the day.

“For any good team, it’s [about defensive play],” he insisted. “It doesn’t matter how much power you have on the back end or up front, you have to be able to keep the puck out of your net if you want to win hockey games. I know that we’ve got a lot of guys who can put the puck in the back of the net, but the focus for us has got to be defence first.”

With Detroit waiting in the wings on Saturday, and already off to a hot 3-1-0 start to the season, getting back in the win column won’t be easy for Toronto. But if some early adversity ends up making the Leafs stronger as time goes on, it’s a price they’ll begrudgingly pay.

“[Last night] was a bit of a wake-up call for us,” said Ceci. “We’re learning we can’t skill our way through every single game. There are other teams that are just as skilled as us, and if they work harder than us, they’re going to win. It’s good to have [issues] this early in the season so that we can address it right away and remember what it’s like if we don't show up to work.”