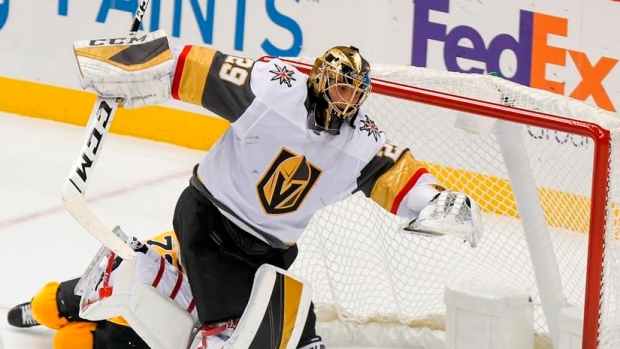 PITTSBURGH — Vegas Golden Knights goaltender Marc-Andre Fleury wasn't happy with his performance in his return to Pittsburgh two seasons ago.

He had a much better time Saturday night.

Fleury stopped 29 shots against his former team, leading the Golden Knights to a 3-0 victory over the Penguins.

"Last time I was in Pittsburgh, I let in five goals," Fleury said. "I wanted to make sure that wasn't happening again. I was just happy that it was a better showing."

Fleury recorded his 445th win, tying Terry Sawchuck for seventh on the NHL career list. Fleury, who made his second career start for Vegas against the Penguins in Pittsburgh, also registered his 57th career shutout.

The Golden Knights won for the fourth time in five games. Paul Stastny scored his fourth of the season, a power-play goal in the second period, and William Karlsson and Mark Stone added empty-netters in the final 90 seconds.

Fleury kept the puck out with a sliding cross-crease shoulder save on Juuso Riikola's power-play chance in the third period. Pittsburgh had several quality chances during another third-period power play, but came up empty against Fleury. Penguins forward Zach Aston-Reese hit the crossbar earlier in the period.

"I just tried to read the play," Fleury said. "They find guys across the crease on both sides. I just tried to be aware of where guys were at and got lucky with a couple posts."

The Penguins played without six regulars, including five of their top nine forwards and a defenceman from their No. 1 pairing.

Jared McCann was held out after he scored in Friday's home win against Dallas. He has missed two of the team's last three games after also sitting out on Wednesday. Defenceman Brian Dumoulin was a late scratch after taking pregame warmups. Forwards Evgeni Malkin, Alex Galchenyuk, Nick Bjugstad and Bryan Rust are all on injured reserve.

Tristan Jarry made 21 saves for Pittsburgh, which had won five in a row.

"I think we did some good things, we just couldn't find a way to score," Penguins captain Sidney Crosby said. "(Fleury) made some good saves. We had a couple that got behind him and hit posts. Some of those usually go in."

Fleury, the No. 1 overall pick in 2003, spent his first 13 seasons in Pittsburgh and helped the Penguins win three Stanley Cup titles before Vegas selected him in the 2017 expansion draft.

Fans gave Fleury a loud ovation as soon as he hit the ice for pregame warmups. Fleury chatted with several former teammates prior to the game, including starting goaltender Matt Murray, who had the night off. Fleury also playfully threw passes to Crosby and defenceman Kris Letang during pregame warmups.

"I saw so many people with signs and my jersey, waving and cheering," Fleury said. "It's always fun to come back."

Fleury made a sharp first-period pad save on a Patric Hornqvist one-timer during a Pittsburgh power play. Letang hit the post on Fleury's blocker side later in the period.

Vegas opened the scoring after Aston-Reese was whistled for goaltender interference. Stastny one-timed a Cody Glass pass into a partially open net at 3:48 for his fourth goal in five games.

That was more than enough for Fleury.

"I was so excited he got a shutout," Stastny said. "I think he earned it. He deserves it."

NOTES: Stone continued a five-game point streak with his sixth goal of the year. ... The Golden Knights recorded their 100th win in 173 regular-season games. Only three franchises have required less than 200 games to reach 100 wins in the regular season, with each entering the league in 1917-18. ... Coach Gerard Gallant registered his 100th win with the Golden Knights. ... Penguins F Jake Guentzel lost a career-high seven-game point streak. ... Vegas D Jake Bischoff made his NHL debut.