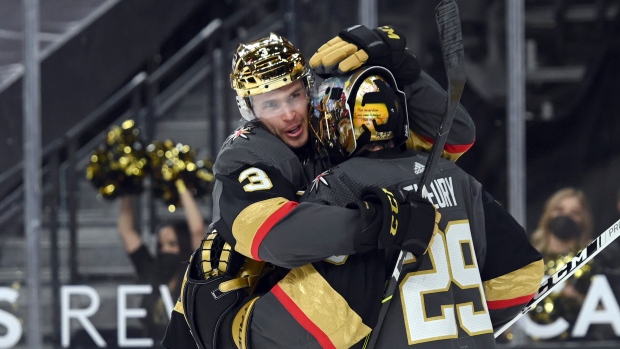 On Sunday, he moved into ties with two of his childhood idols.

With the win, Fleury snapped a season-high three-game losing streak and tied Belfour for fourth in NHL history with 484 wins.

Fleury, who improved to 3-0 against Arizona this season, also moved into a tie for 15th on the career list with Patrick Roy with 66 shutouts.

Vegas, which ranks seventh in the league with 3.26 goals per game, scored just one goal for the fifth time in Fleury’s past seven starts. Since teammate Robin Lehner returned from a concussion, the Golden Knights have scored 10 goals in seven games to support Fleury. They’ve scored 28 in that span to back Lehner.

“The guys have been so good to me, they always score a lot of goals, help me out defensively,” Fleury said. “Again tonight we scored one, but we also played really well and didn’t give them much.”

One was enough for the Golden Knights as it was Nosek continuing his hot streak.

Reading the defence perfectly, Jonathan Marchessault backhanded a touch pass into the slot for Nosek, who skated in and fired a wrist shot past Arizona goalie Adin Hill’s glove to make it 1-0. Hill — who was pulled from Friday’s game after spotting Vegas a 5-0 lead — made 28 saves.

Nosek has six goals and 13 points over the past 17 games and his seven goals overall this season are one shy of tying his career high.

After Friday’s wild game, in which the Golden Knights opened with the game’s first five goals, only to see Arizona close the gap with a third-period surge, things were much tighter Sunday.

Both teams had quality chances in the first period, but the defences were solid on the backcheck, staying aggressive while pushing rebounds to the perimeter and clearing the puck quicker to keep both Hill and Fleury out of danger.

“We didn’t really want to worry about the result — we wanted to play well,” Arizona’s Derick Brassard said. “It was a pretty physical game. It was almost like a playoff game out there. We had to show some character here and that’s what we did. I thought we did a good job tonight.”

Moments after Nosek’s goal, Arizona forward Phil Kessel had a chance in front of Fleury, but whiffed on a perfectly centred pass. Dryden Hunt also clanked one off the post from Fleury’s right, shortly thereafter.

“The guys worked hard tonight, it was a good effort,” said Arizona coach Rick Tocchet, who was critical of his team two nights earlier. “We had some opportunities there. I thought we played pretty tight. I’m not gonna analyze every guy. Our team has to play a certain way and sometimes they have a tough time staying with it. I thought tonight they did it.”

Vegas, which improved to 13-5-0 against the Coyotes, has won six straight at home against Arizona.

Vegas’ 6-foot-2, 225-pound bruising forward Ryan Reaves delivered a shoulder to the head of Arizona’s defenceman Jordan Gross as he cleared the puck in the first period. Gross, who stands 5-foot-10 and weighs 185 pounds, did not return to the game due to a lower-body injury, per the team, as Reaves’ right knee struck Gross’ right knee during the collision.

Arizona: Will make up a postponed game from Feb. 11 at Colorado on Monday.