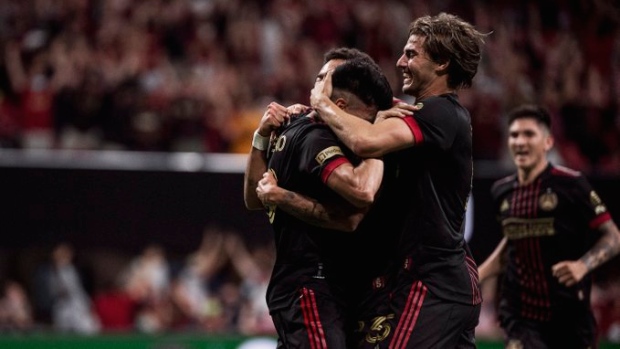 ATLANTA — CF Montreal suffered a last-second 1-0 defeat at the hands of Atlanta United FC in front of an imposing crowd of 40,116 fans at Mercedes-Benz Stadium on Saturday night.

It looked like Wilfried Nancy’s men had secured a point in a 0-0 draw when Marcelino Moreno headed a Jake Mulraney cross past Clement Diop in the final seconds of second-half stoppage time.

Mere moments before the game-winning goal, Montreal forward Sunusi Ibrahim was deep in Atlanta's half but failed to take a shot on goalkeeper Brad Guzan.

CF Montreal (2-2-2) was blanked for the third time this season.

Playing for the third time in eight days, the CF Montreal players did not see much of the ball and ended the game with 36.8 per cent possession. They nevertheless managed 10 shots, including two on target – the same amount as Atlanta United (2-1-2).

Forward Romell Quioto left the game on a stretcher in the 72nd minute of play after suffering an apparent calf injury. The injury occurred moments before Nancy was set to take him out of the game.

Montreal’s next contest is against FC Cincinnati on May 22.

The visitors were pinned deep in their own half for the first 10 minutes of the match. During that time, Atlanta United created three good scoring chances. Diop was forced to make a save on one of those.

By the end of the first half, CF Montreal had managed just one shot on target -- Bjorn Johnsen’s in the 30th minute, which was easily saved by Guzan.

It was more of the same in the second half, with Atlanta controlling the play deep in Montreal’s territory.

Nancy called upon substitute Ahmed Hamdi in the 65th minute. The Egyptian player nearly gave CF Montreal the lead, but Guzan was up to the task.

Officials added four minutes of stoppage time at the end of the game, and the visitors conceded in the dying seconds of that fourth additional minute.

This report by The Canadian Press was first published May 15, 2021.