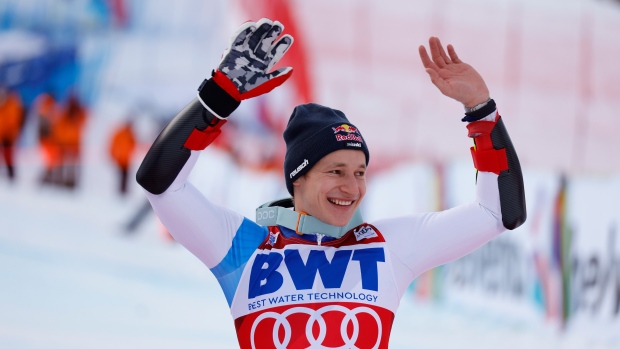 At the limit of his balance skiing down the steep final slope, Odermatt hung on to his morning lead to be 0.48 seconds faster than Manuel Feller, who soared from fifth place with the fastest second run.

Alexis Pinturault was third, 0.54 back, and conceded more points to World Cup leader Odermatt in the defense of his overall title.

Odermatt now has four wins and a runner-up finish in five giant slaloms this season and is the expected strong favorite in the next — at the Beijing Olympics on Feb. 13.

“Marco is alone in his own universe this year," Pinturault, who took bronze in giant slalom at the past two Winter Games, told Swiss broadcaster RTS. “He has a level that today no one can reach.”

Odermatt became the first Swiss winner of the storied Adelboden giant slalom since 2008 when Marc Berthod won on the snow-covered cow pastures.

His winning run was cheered to the finish by more than 13,000 noisy fans lining the Chuenisbärgli hill who were absent last year because of the COVID-19 pandemic.

“I really wanted to win today and give all the Swiss guys here a great show,” Odermatt said, adding he was “a little bit proud that I managed to ski down here twice like this.”

All five men won at Adelboden starting with Killy in the first week of the debut World Cup season in January 1967.

Odermatt is the runaway leader in the season-long giant slalom standings, ahead of Feller, by earning 100 more race points Saturday. With three scheduled races left, Odermatt can seal the crystal trophy at the next one on March 12 at Kranjska Gora, Slovenia.

He also leads the overall standings by a big margin of 376 from Aleksander Aamodt Kilde, the 2020 champion who skipped the Adelboden meeting. Odermatt will not race in a slalom scheduled Sunday.

Odermatt's combined winning time of more than 2 minutes, 34 seconds was unusually long for a giant slalom. It was run on hard snow under cloudy skies with temperatures around minus-2 Celsius (28 Fahrenheit).

Five of the top-15 starters failed to finish a twisting and tiring first run.

Luca De Aliprandini, the worlds silver medalist last February, crashed out when faster than Odermatt through the third time check. His left ski hooked a gate — a rarity in giant slalom where the margins for making turns are wider than in slalom.

River Radamus, the highest-ranked American in the race wearing bib No. 14, crashed out at the second-to-last gate and was sent sliding sideways across the finish line.