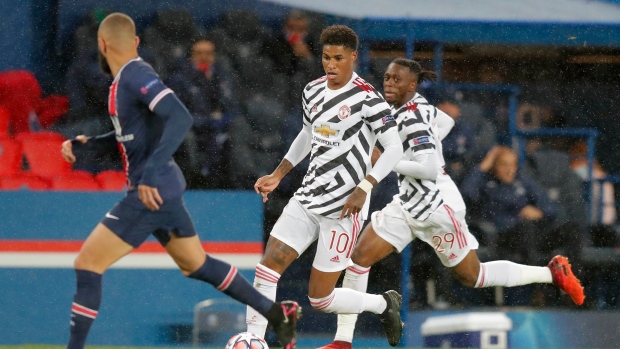 PARIS — It was a case of déjà vu as Marcus Rashford returned to haunt Paris Saint-Germain, scoring with another late winner as Manchester United won 2-1 in their opening Champions League group game on Tuesday.

Two seasons ago United knocked PSG out in dramatic style to reach the competition's quarterfinals, with a nerveless Rashford scoring a last-gasp injury-time penalty to win 3-1 in Paris having lost 2-0 in Manchester.

This time he netted in the 87th minute at a rain-soaked Parc des Princes, collecting a pass from substitute Paul Pogba and easily turning his marker before smacking a low shot past goalkeeper Keylor Navas from the edge of the penalty area.

“When it’s late on, you might only get one chance and you need to do your best to make it count," Rashford said.

“It’s a good performance but we also have a lot to build on," Rashford said. “As players, it’s important to believe in the system that the manager tells us to play in.”

United was leading through midfielder Bruno Fernandes’ twice-taken penalty midway through the first half when United forward Anthony Martial rose to clear Neymar’s corner from the left, but instead his glancing header flew past goalkeeper David de Gea to make it 1-1 in the 55th.

De Gea denied Angel Di Maria early in the first half and Kylian Mbappe just after the break with a superb one-handed save that will doubtless boost his confidence after some heavy criticism of his performances in recent months.

Navas had thwarted Rashford with two excellent stops in the last 20 minutes, but even he could not get his hand to the ball as Rashford arrowed his winner into the bottom left corner — to much jubilation from Solskjær.

PSG lost last season's final to Bayern Munich and travels to Turkey under early pressure next week. It was a disjointed performance from PSG, and coach Thomas Tuchel thought his side’s first-half performance in particular was very poor.

“The good news was that we could only play better. It’s not hard to play better than that,” he said. “We lacked rhythm and intensity. It was surprising because we prepared the game well.”

Neymar again failed to score after having not done so during the Final 8 in Lisbon, where he was poor in the final.

While Neymar was booked for complaining to the referee, Mbappe was PSG's most dangerous player and almost scored a spectacular solo goal in the 49th.

He weaved in from the left, beat two players with great skill and fired a shot toward the top right corner, but De Gea reacted superbly to push the ball around the post.

While the goalkeepers were good, both sides had key players missing through injury and neither had a presence in midfield. The fast-paced game became an end-to-end contest with one counter-attack following the other and gaps everywhere that should have been better exploited.

PSG centre half Presnel Kimpembe was highly critical of his team.

“I don’t have an explanation, we simply were not good. We weren’t strong in the challenge, we were slow to track back,” he said. “We started the game badly and finished it badly. It’s a pity to lose points this way at home. We were too slow to make tackles and paid a heavy price.”

For while Mbappe's pace tormented United so did Rashford's speed and Martial's mobility. It was Martial who drew a clumsy foul from Abdou Diallo — replacing the injured Marquinhos — for United's penalty.

Fernandes had missed a penalty for the first time in the United jersey against Newcastle on Saturday. Navas guessed the right way and dived to his left to stop his effort this time, but a video review showed the Costa Rica goalkeeper had both feet off his line when Fernandes struck the ball.

The Portugal international showed considerable nerve to re-take the kick, rather than let someone else do so, and this time Navas guessed wrongly as Fernandes aimed his kick the same way.

“It could only go better after two misses in a row," Solskjær said. "He’s not going to stop taking them, but you need focus and character. Bruno showed that today.”