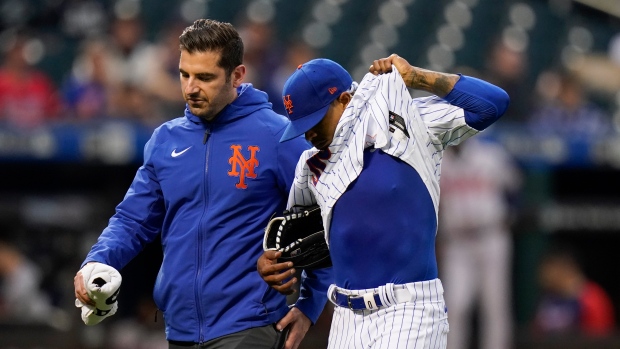 New York Mets' starter Marcus Stroman left his start Tuesday after just one inning because of an apparent injury.

Yennsy Diaz came on to replace Stroman not long after the training staff was summoned to the mound following his 21st pitch of the night in the middle of an at-bat against Atlanta's Austin Riley.

Stroman was making his 15th start of the season for the Mets and came into Tuesday's outing with a 2.35 ERA and 1.04 WHIP.

Acquired by the Mets in a trade with the Toronto Blue Jays in exchange for left-hander Anthony Kay and righty Simeon Woods Richardson, Stroman is in his second active season with New York. He was originally traded to the Mets in the summer of 2019 but opted out of the 2020 season due to COVID-19 concerns.

Prior to the trade, the 30-year-old spent six seasons with the Blue Jays, pitching to an ERA of 3.76 in 135 appearances.