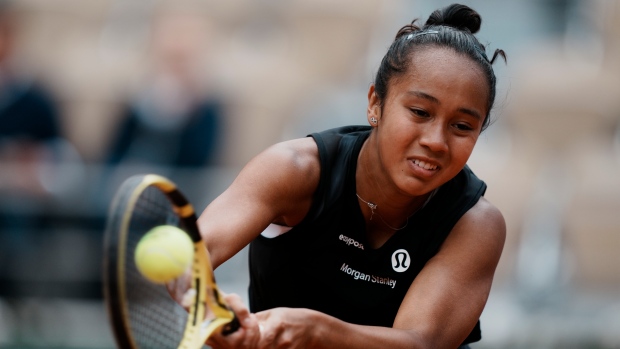 Leylah Annie Fernandez is making progress in her recovery from a right foot injury sustained at the French Open.

"The rehab process has been going great and on track," the 19-year-old said. "I am out of the boot so that is big news. I'm just getting used to walking without it, doing a few exercises here and there and hopefully will be back on the court real soon."

Fernandez, who sustained a Grade 3 stress fracture at Roland Garros, is aiming to return to competition on July 24 when she's scheduled to face Coco Gauff in an exhibition match in Atlanta. Her first WTA tournament back, if all goes well, will be the Citi Open in Washington, which starts one week later.

"I'm just following the doctor's orders," the world No. 15 said. "We're not trying to rush anything. We don't want to do any wrong movement or do anything wrong that will set me back even more. So, we'll take this day-by-day and hopefully I'll be back on court soon."

During an interview with TSN on Friday, Fernandez explained why this injury is so "heartbreaking." The native of Laval, Que. also spoke about the "crafty" Ons Jabeur, "legend" Serena Williams and her expectations for the hard-court season. The following is an edited transcript of the conversation.

TSN: What has been the biggest challenge dealing with this injury?

Fernandez: "Patience (laughs). That's the greatest challenge. Normally, I am very patient but that's because I have tennis. This time I don't. I see my younger sister [Bianca Jolie] playing tennis. I see my dad [and coach Jorge] going on court too. I just want to be there with them, suffering with them, and hitting a tennis ball. I know Wimbledon is going on right now so that's also, like, breaking my heart a little bit."

TSN: How have you been keeping busy?

Fernandez: "I've been annoying my family for the past few weeks (smile). I'm pretty sure they're getting tired of me. I've been spending time with Bianca. She's always there by my side. Now, she's in a tournament so I'm watching from afar. And I'm watching some movies, TV shows and reading a few books. Yeah, that's pretty much it."

TSN: Have you watched any Wimbledon?

Fernandez: "A little bit. A little bit. You know, when it's on TV I will watch a few points here and there. But, as I said, it's hard because I want to be there. I want to be competing. It's a little heartbreaking, but it gives me more motivation to get back on court quicker."

TSN: How did the injury happen?

Fernandez: "I felt a pinch in my third round match and I didn't think anything of it. I thought it would be a normal little nick on my foot, but then as the week progressed it was getting worse and worse. In my last match, and even the day before, it wasn't that great. We were hoping it would be good for the quarterfinals, but it did not go well."

TSN: How would you describe the pain?

TSN: Your dad was urging you to retire from the match. Why didn't you?

Fernandez: "A competitor doesn't want to stop in the middle of a game, especially in the quarterfinals of a Grand Slam, a Grand Slam she's dreamed of participating in since a very young age. Now I think I should've stopped, but on the court and in the moment I'm thinking, you know, how many more quarterfinals will I have? How many opportunities will I have here? I don't know and hopefully I can escape with the win. Maybe, everything falls in. Unfortunately, it did not. I just wanted to keep playing because I love the sport and because I wanted to see how far I could go ... I made my own decision and we live by it. I've learned from it and next time I'll know what to do. Hopefully there won't be a next time."

An emotional Jorge Fernandez - father and coach of Leylah Annie Fernandez - reveals that his daughter suffered a Grade 3 stress fracture in the top of her right foot, and explains how hard it is to watch his daughter while she's playing in pain.#RolandGarros pic.twitter.com/dViwEUj1dR

TSN: The injury cost you a shot at a Grand Slam semifinal. How did you deal with that, mentally, afterwards?

Fernandez: "It was hard. The first few days, I was very heartbroken. I was hoping it would just be a sprain or that a nerve got [pinched] or a muscle in my foot had something wrong and it would just be a few weeks, but a stress fracture set us back even more. I was very heartbroken because I knew I was close to a semifinal of a Grand Slam and potentially playing against Coco Gauff. That would've been a great match. I remember playing her in the semifinals of Roland Garros juniors just a few years ago [in 2018]. It would've been so much fun to see us both in that same situation a few years later. It was heartbreaking because there were so many what-ifs and so many moments that I think could've been beautiful. The stress fracture set us back a little bit and took away the progress from the tournament and the confidence that I had coming into those matches. It took that away a little bit, but it's just a small setback."

TSN: What excites you about the chance to face Gauff in Atlanta?

Fernandez: "For me, it's just about getting back on court and competing again. I haven't played a match in a long time so getting back on court in Atlanta and playing against Coco, what better way to get welcomed back to competition. Coco is a great competitor and great player and I know she'll be that for a long time … It's great to see both of us doing well at the WTA level and bringing our own game on tour. We've tried to push forward the next generation. We've tried to inspire younger kids and we've done a good job."

TSN: What are your expectations for the hard-court season?

Fernandez: "Getting back and being healthy. We just want the foot to be OK and the body to be ready for competition, for long matches, for hard matches, because all the players at these tournaments are extremely good. I just want to be there with my body feeling great, mind feeling fine and enjoying my time on court and in competition. We don't want to think of any results. Of course, I want to win. Every athlete wants to win a match, wants to win the tournament, but for me the big thing is my body feeling great by the end of the year."

TSN: Ons Jabeur has reached the Wimbledon final. You played her twice. What stands out about her game?

Fernandez: "Ons is a difficult player to play against because she's so crafty. She does these slices and drop shots out of nowhere ... She's a beautiful player to watch because she's so unpredictable. I'm very happy for her. She's worked so hard. I know her and her team and they're very humble. I'm just extremely happy for them."

TSN: What was it like to see Serena Williams return to competition?

Fernandez: "I was very excited. Tennis has missed her. She's a big legend. Just seeing her back on court, competing and giving it her all and not giving up is a true inspiration. I know that kids and professional players are looking up to her. Hopefully I can share the court with her before she retires. Hopefully that's not too soon. Hopefully I can play a match against her. I just want to be able to tell everyone that I was able to play a match against Serena Williams. She's just legend."

TSN: The all-Canadian pair of Kayla Cross and Victoria Mboko will play in the Wimbledon girls doubles final. You won a junior Grand Slam. Any advice for them?

Fernandez: "I saw the result and I'm extremely happy for them. The best advice I can tell them is to enjoy the moment. You're going to play a Grand Slam final at Wimbledon. It's going to be magical. You're going to have people cheering for you. If you enjoy the moment then in the years to come you'll be able to just calm down and know that, 'I did that as a young kid. I was able to achieve a goal that not many players have been able to achieve.' Win or lose, enjoy the moment, have fun and be there for your partner, that's all you can do."

TSN: In a recent Instagram post you wrote, "My younger self would never believe I would become a professional tennis player." Why did you feel that way?

Fernandez: "It's hard, because you can't see the future. I've always wanted to be a professional. That was always my dream. I've always believed in myself, but then there's always a few voices here and there that say, 'You're not going to be able to make it.' Sometimes in those down moments when you've lost a game or a final or in the first round of a tournament, you start thinking those thoughts. Like, am I really going to make it? Will I be stuck in this position? What's going to happen? There are these little moments that happen throughout a career. I was lucky to have family beside me along the way to always bring me back up in those moments. They would always say, 'These things happen. It's normal to have those thoughts. But, are you willing to get back on the tennis court and keep working hard?' That's what I'm grateful for: that I had these people beside me to tell me that and make me realize that, yes, I want to get back on court and work harder now. I posted that video because I can't say that I've always had that determination and never had those thoughts, because that would be a lie. Everybody has thoughts of self doubt, but it's who you are surrounding yourself with and whether you have that motivation to get back on the court or the field the very next day."