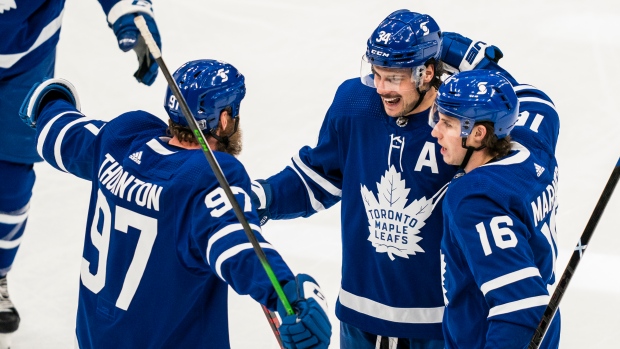 TSN Toronto Reporter Mark Masters reports on the Maple Leafs, who held a practice at Ford Performance Centre on Friday ahead of Saturday’s rematch with the Montreal Canadiens.

Despite facing plenty of pressure this season, Auston Matthews and Mitch Marner have taken their games to the next level. And they've taken their cues from 41-year-old Joe Thornton.
​
"No stress," Matthews said when asked about Thornton. "He's a guy that just has no stress. Something I've learned from him is just not to stress out and just go with the flow."

Thornton has maintained his positive personality this season even as he dropped to a fourth-line role while adjusting to a new position (left wing) and a new team. Ahead of Thursday's game, Thornton described himself as a "chameleon."

"There's ups and downs and Jumbo's a guy that's always in the same mood every single time," Marner said. "He's a guy that just makes you think of the good things and that's something I've really taken away from him."

With Nick Foligno sidelined, Thornton is currently slotting in with Matthews and Marner on the top line where he started the season. Thornton extended his point streak to seven games with an assist on Marner's goal on Thursday night. He owns the longest active point streak in the NHL.

It appears Marner has also inspired Thornton in a way. Specifically, with his hair style.

"He's got a nice mullet," noted defenceman Morgan Rielly. "A little [like David Spade in the movie] Joe Dirt. I think it's good. If you look closely, Joe actually has the same thing going and I know Jack [Campbell] did something else. He's a bit of a trendsetter that way."

Considering how well Marner has played you can understand why he doesn't want to risk a trim. Marner sits third in league scoring with 66 points while averaging 22 minutes and 27 seconds of ice time per game, second among NHL forwards.

"He's like a magician with the puck," said Alex Galchenyuk. "He's smooth. He's got an outstanding skill-set and the chemistry he has with Matty is tremendous."

Marner fondly recalls the moment Matthews became a member of the Maple Leafs organization on June 24, 2016.

"I was at a concert at Budweiser Stage and I remember we picked him and everybody started an 'Auston Matthews' chant and the kid I was, and am still, I was in the middle of it chanting as well," Marner said with a smile. "I've told [Auston] that story a couple times."

The pair hit it off at the team's development camp a week later and the bond has only grown from there. On Thursday, Marner set up yet another Matthews goal.

"He did a really nice job of drawing a guy into him and gave me a bit of a lane there," Matthews said.

Matthews has 40 goals this season and Marner has assisted on 25 of those goals.

"Just him getting it done at both ends of the ice," said Matthews when asked what impresses him about Marner's season. "He's a guy we use in all situations and he makes a difference in all situations. It's a treat to play with a player like that. It's just a lot of fun."

"Mr. Foooorty," bellowed back-up goalie David Rittich as Matthews hit the ice on Friday. But Matthews didn't flinch as he headed to yet another pre-practice skills session. He's putting together one of the most explosive goal-scoring seasons in Leafs history, but remains a man on a mission.
"There's a lot of hard work that obviously goes into it in the off-season," Matthews said. "I just try to come to work every day and help the team win. I mean, that's really what it's all about. I'm fortunate to play with some really good players. So, I feel really fortunate and blessed, but it's all about winning games and going deep in the playoffs. That's really what my main focus is on and all the other stuff is just a cherry on top."​​

"I can't imagine the amount of pressure he has on his shoulders," Campbell said. "It's funny, you don't think of it because ... he never makes excuses. He never complains. He's always just working harder, doing what he needs to do to prepare for the game and, once the puck drops, you know 34 is going to bring it."

Working with a new trainer, Matthews dropped weight in the off-season becoming a leaner, meaner scoring machine. He also worked out alongside Edmonton's Connor McDavid as the two rivals pushed each other to greater heights. The hard work is now paying off.

"He makes it look so easy," marvelled captain John Tavares. "It's unreal to watch."

It hasn't been easy. A nagging wrist injury forced Matthews to miss four games this season, but he simply adapted during that time and found different ways to influence games whether by going to the net and using his tremendous hand-eye skills or playing a more physical game.

"His compete level, actually, is super underrated," observed forward Stefan Noesen, who played his first game as a Leaf on Thursday. "Everyone talks about his goals and his wicked release, which speaks for itself, but the way he goes in and protects the puck, and goes and gets the puck back and uses that 6-foot-3 frame [is impressive]. He plays bigger than he actually is, which I don't even know if that's possible."

After an impressive run in the last eight games, defenceman Rasmus Sandin will not suit up on Saturday and may not dress again in the regular season.

"Rasmus has played very well," coach Sheldon Keefe said. "We have liked a lot about his game and what he brings to our team. His situation is more related to the salary cap than anything else ... It is more pre-emptive than anything, just giving ourselves some flexibility as we get into next week."

The Leafs wrap up the season with games in Ottawa and Winnipeg on Wednesday and Friday next week and may look to activate a player off the injured reserve.

On Saturday, Ben Hutton will draw in and play on the third pair with Travis Dermott. Hutton has played just one game since being acquired by the Leafs from the Anaheim Ducks at the trade deadline on April 12.

"The first thing I like is just his personality," said Keefe. "Things don't rattle him or bother him too much. He just goes about his business. He is a good teammate and a good guy to have around in that sense. He is a guy who has played a significant amount of time in the NHL (376 games). He has come in here and hasn’t played very much and yet it hasn't been a distraction or an issue. He went into the lineup and I thought played a really good game for us despite playing for a new team and not having played for quite a long time."

Hutton logged 22 minutes in a win by the Leafs over the Canucks on April 29.

"He moves the puck really well and makes a lot of good poised plays on the break out," Keefe continued. "It is an area that we really value and need from our defencemen. I think an opportunity to get him more involved will serve him and our team well."

Frederik Andersen stopped 12 of 14 shots in 31 minutes of work with the Toronto Marlies on Thursday afternoon.

"I watched the game as I do with most Marlies games when they don't conflict with ours," said Keefe. "I wasn't overly focused on him and his play. His stint with the Marlies is really just about him getting back into game action and getting back to building up his workload to be able to play NHL games. That is what it is about."

Due to a knee injury, Andersen hasn't played an NHL game since March 19.

Pierre Engvall has been a heathy scratch in four of the last six games, but produced a goal in both games he played, including Thursday night.

Off to the races 🐎#LeafsForever pic.twitter.com/dwgMEnbd7Y

"That helps his confidence, of course, but the reality is that's not why he hasn't been playing here of late," Keefe said. "We need Pierre to be really competitive, physical on the puck, win puck battles, be strong defensively, do little things to help our team win and any production that comes from that would be great. I just think he's got so much more to give to our team outside of any offensive production or anything like that. Until he finds that level he's going to find himself continuing to look to see when his next opportunity might come."

Engvall was on the ice when Artturi Lehkonen scored in the third period on Thursday. Keefe immediately went over to Engvall when the forward returned to the bench and whipped out a white board.

"I should've stayed more toward the middle," Engvall said. "I learned what to do so that's good."

Engvall appears like he'll get another chance to play on Saturday as he skated on a line with Alex Kerfoot and Ilya Mikheyev at practice.

​On Thursday, he played on a line with Wayne Simmonds and Jason Spezza.

"We played pretty good," he said. "We had some time in the offensive zone. The first period was probably the best one for our line and second one and third one we gave up a little bit, but overall a decent game."

The Leafs need just one more point or one more Oilers loss to clinch top spot in the North Division, but Keefe has no plan to rest anyone in the last three games.

"I am only focused on Saturday's game," the coach stressed. "I will say, in terms of how I look at the last couple of weeks of the season, with the exception of the one back-to-back that we've played, the way the schedule is laid out is pretty favourable for us in terms of workload and rest ... We have some bumps and bruises but, generally speaking, especially for those that are playing the biggest minutes, they are doing well and feeling good at this time."

The Leafs wrap up their regular season on May 14 in Winnipeg, but the North Division schedule extends through May 19 and it's unclear when the playoffs will begin.

"I am not overly concerned with the rest factor," Keefe said. "In fact, if anything, I am a little more concerned with a potentially large gap between our games and the start of playoffs, and increasing that gap if we were to sit anyone."

---
Foligno skated on his own on Friday as he works his way back from an upper-body injury.

"That is, obviously, a good sign for us here," Keefe said.