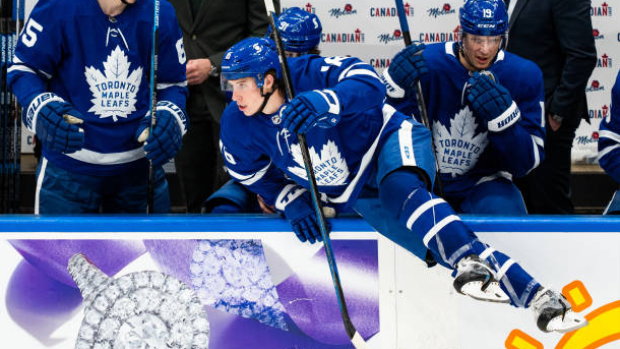 Due to salary cap constraints, the Leafs can only rest one regular tonight. They chose Mitch Marner.

"He's had a big workload here all the way through," noted coach Sheldon Keefe.

Marner leads all NHL forwards in average ice time this season clocking in at 22 minutes and 26 seconds per game. He logged 21 minutes and 53 seconds on Wednesday.

What are the priorities tonight?

"Play well, have good habits, do what we can to win the game and, probably most importantly, get out of it healthy," Keefe acknowledged.

After locking up first place in the North Division over the weekend, the Leafs struggled to maintain focus during an overtime loss in Ottawa.

"This is an important game just to have the right systems in place, be playing the right way and have good team confidence going into playoffs," insisted defenceman Justin Holl. "It's going to be a competitive game even though, standings-wise, there's not a lot to compete for, obviously."

With a win of any kind tonight, the Leafs will finish fourth overall. With an overtime or shootout loss, they will finish fifth. With a regulation loss, Toronto will drop to sixth. ​

The Leafs went 7-2-1 against the Canadiens in the regular season scoring 34 goals, but Auston Matthews is expecting things to tighten up in the playoffs.

"They play with a lot of structure defensively," Matthews said. "They're tough to get inside [on]. Obviously, they got good goaltending, pretty solid depth all throughout their lineup, so it's not going to be easy. Offence isn't going to be easy to come by, so we got to earn it."

Matthews produced a point in all 10 games against the Habs, finishing with seven goals and seven assists in the season series.

"He's not as consistent with his tactics as most guys," Canadiens goalie Jake Allen told reporters in Montreal earlier this week. "A lot of guys, just from experience, get in certain positions and have scored certain goals on certain sides of the net or certain angles and when they get that puck they tend to go back to those tendencies a lot of the time. Matthews is an open book, where he just sort of does what he feels and he's not as easy to read or as easy to understand as most players."

With 41 goals on the season, Matthews is eight ahead of his closest pursuer, Edmonton's Connor McDavid, in the Rocket Richard Trophy race.

"Sometimes he'll shoot high glove from a certain spot, the next time he'll shoot low blocker, low glove," Allen continued. “He's sort of all over the place and you've just got to be on your toes and you've got to be patient and sort of try to read his release as best as possible."

Matthews is set to become the first Leaf to lead the NHL in regular-season goals since Gaye Stewart in 1945-46. Toronto entered the season with the second-longest drought in the league behind the Rangers, who have not boasted the goal leader since Lynn Patrick in 1941-42.

Matthews hasn't gone more than five games without a goal this year.

"He's been so levelheaded throughout the whole deal and been scoring goals at such a mind-boggling pace," said Holl. "What doesn't get a lot of recognition is that a lot of the goals have been even strength."

Matthews has scored 31 goals at even strength this season.

Toronto has converted on just six of 76 power-play chances (7.9 per cent) in 31 games dating back to March 4.

The stacked top unit featuring Matthews, Marner, John Tavares and William Nylander with Morgan Rielly up top was out of sorts on Wednesday and allowed a shorthanded goal.

"Just a little disconnected, a little bit too much waiting around," said Matthews, who leads the team with 10 power-play goals. "We've got to simplify it and just try to shoot the puck a little bit more and get pucks to the net."

"It just needs to execute," Keefe stressed. "If you go back and look at each of the power plays, our best players have the puck on their stick at different times and we just don't make a play. We either give it directly right back to them or they take it from us. It's not a matter of structure or anything like that [on Wednesday]. It's just a matter of having the puck on your stick and making the appropriate play, and we fail to do that with our first unit. The second unit I thought was excellent, scored us a great goal."

Jake Muzzin, who is unlikely to be on the power play once Rasmus Sandin returns to the lineup, got the power-play goal on Wednesday as the Leafs finished 1-for-5. It was only the third power-play goal by a Leafs defenceman over the past two seasons. Rielly and Tyson Barrie have the others.

"Confidence is big on the power play," said Alex Kerfoot, who recently joined the second unit. "You see a couple go in, get a little momentum going, and everything just kind of loosens up. Going through this stretch I think at times we're overthinking it, tight at certain times of the game, and forcing plays too much. If we simplify our game and just focus on the process, we got good players that are going to get the job done."

After missing two games with an upper-body injury, Nick Foligno returned to the Leafs lineup on Wednesday.

"It was nice to get back in," the 33-year-old forward said. "It felt like a game that we weren't at our best as a group, so it's always hard to try and find yourself, especially with all the special teams [play]. Hopefully there's a little more fluidity to the next one and I can feel better."

The game in Ottawa was the first time Foligno played on a line with Tavares and Nylander. The trio shared the ice for just under nine minutes in five-on-five play and outscored the Senators 1-0. Nylander set up Tavares on the goal.

"They're just so good with the puck and they've obviously had a little chemistry playing together here," Foligno noted. "You just try to get to spaces and be around the net for them. They have the ability to hold onto pucks and make plays with their bodies."

Foligno fired two shots on net on Wednesday and led the Leafs with six hits. He also helped the penalty kill go 4-for-4.

"He was pretty good," said Tavares. "We got better as the game went on. Obviously, he hasn't played in a few days and it was our first time playing with him. He's been around the block a few times, so he understands how to play the game and find a way to get his game going and fit in and stick to his strengths. You could see on Matty's goal just his ability to buy time, create spacing and [he] got the puck down low to me and just made really good plays to lead to that goal. His ability along the walls and in front of the net is really, really good."

Zach Hyman and Riley Nash are on this trip and it was interesting to see the pair, who are coming off of knee injuries, take part in some extra five-on-five drills at the end of the optional morning skate. A few regulars, who will play tonight, stayed out later than usual to take part in the session, including Kerfoot and Ilya Mikheyev, who skated on a line with Nash.

"It was more to get some of those guys reps who haven't been playing," Kerfoot revealed. "For Hyms and Nash, it's unfortunate that they haven't been able to get into a game, but they're feeling good, feeling healthy now and getting them some reps before playoffs is kind of the main thing."

Nash also skated on a line with Kerfoot and Mikheyev at Tuesday's practice.