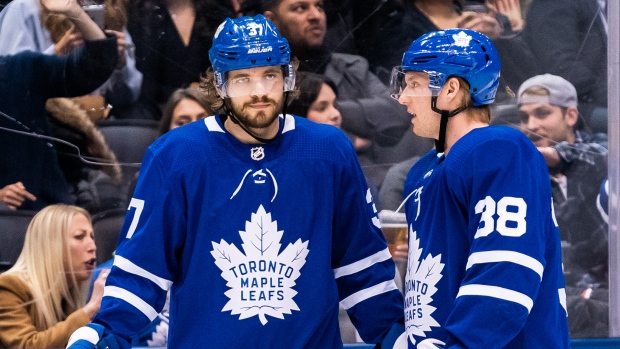 Jake Muzzin is out with a concussion and Justin Holl remains in COVID protocol, which means the Leafs are missing their entire second pair on defence. On Wednesday night in New York that role will be filled by Rasmus Sandin, 21, and Timothy Liljegren, 22.

"It's a terrific opportunity," coach Sheldon Keefe said. "They got game breakers on the other side that are difficult to defend against. If you make mistakes, they make you pay but, at the same time, if you're a young guy, I'd be super excited tonight to take that on."

Sandin will be playing his 68th National Hockey League game while Liljegren will be suiting up for the 35th time.

"It's the type of experience that should help those guys on their development path," Keefe said. "One way or another, those guys are going to be better at the end of the game here tonight than they were going into it, and that's saying something considering both guys have played very well for us this season."

The Rangers are among the top teams in the Eastern Conference and boast dangerous threats like Artemi Panarin, Mika Zibanejad, Chris Kreider and Norris Trophy winner Adam Fox, who leads the team with 39 points.

"You have to be that much more efficient in your game," Keefe said. "You're playing against better players more often."

Keefe pointed out that the pair of Swedish first-round picks will also get more time on the ice with Toronto's top lines.

"I'm excited to see how this goes and how these guys manage it," said Keefe. "I think this experience is going to help those players and it's going to help us as a team, regardless, to see where we're at in this area."

Liljegren has already played a handful of games in the top four alongside Muzzin, including on Saturday night in St. Louis. This will be Sandin's first real look in the top four this season.

T.J. Brodie is impressed with how Sandin is handling his first full season in the NHL.

"Just his poise with the puck," the veteran defenceman observed. "There's times when it would be easy to throw the puck away or try and get it out of the zone, but he's got the ability to spin off checks and find the guys in the middle and make those plays. It's something you can't really teach."

"I feel like a lot of Swedes have it, that swagger," noted winger Mitch Marner. "He's one of the best open-ice hitters on our team and going around right now. Overall, his 200-foot game is getting a lot better. He's doing a lot of things great defensively and when he gets the puck his skill really comes alive."

Alex Biega will draw in on the third defence pair alongside Travis Dermott. It will be Biega's second game with the Leafs this season.

Jack Campbell gets the start for the Leafs. He allowed five goals on 25 shots on Saturday in St. Louis. It was Campbell's worst save percentage (.800) in a game he finished this season.

"He's proven to be consistent, so I would expect he would bounce back," said Keefe. "I would also expect our team to defend better around him."

Specifically, the Leafs have focused on doing a better job of protecting the front of their net after watching 15 goals go in during the recent four-game trip through Colorado, Las Vegas, Arizona and St. Louis.

Campbell is incredibly hard on himself and channeling those emotions the right way was a big issue early in his career. But now that internal accountability is becoming an important asset.

"He's just really maturing and turning into a really steady goaltender who we believe will be a game changer for us every night," said veteran forward Jason Spezza.

"He's really been the backbone of this team," said Marner. "Sometimes we do get a little loose and he's got to make a lot of big saves. That Colorado game, watching that one, a couple saves he made there were spectacular and jaw-dropping. He's a guy that really does hold himself to a really high standard."

The Leafs and Rangers have split a pair of games in Toronto this season. The Rangers stole two points in a 2-1 overtime win on Oct. 18. The Leafs turned the tables in a 2-1 win a month later on Nov. 18.

"For us, it's trying to make him feel uncomfortable in net and trying to be around his eyes, taking away vision if we can," said Marner. "Other than that, I mean, I guess we'll see when it comes down to game time. I don't want to say anything or give anything away."

Auston Matthews has fired 11 shots on Shesterkin this season but has yet to solve the Russian goalie. If Matthews can put a puck past Shesterkin tonight, he will make NHL history. The 24-year-old centre has scored in 10 straight road games. The longest single-season streak in NHL history is 11 games, which was accomplished by Steve Yzerman (1988-89) and Pavel Bure (1993-94).

"Hopefully it does happen tonight, but we got to make sure we're not forcing anything," said Marner. "The great thing, first off, is it's not like he's out there just playing selfishly and looking strictly for goals. He's doing it the right way. A couple of those goals have been dirty, around the net, and hard-working goals and a couple of them have been his pure talent of beating the goalie cleanly. It's something remarkable we get to watch every day: him practising his shot and getting better every day. Hopefully it happens, but I don't think he's too stressed if it doesn't happen."

Marner made it clear he won't be forcing plays to Matthews. He scored on Saturday in his return from the COVID protocol and has spoken repeatedly about wanting to finish more of his own chances.

Saturday's strike was Marner's seventh goal of the season in his 27th game.

"It's something I want to make sure I keep going with," Marner continued, "being a threat and, whenever I'm called upon, being able to shoot and try to score and not trying to look for the extra pass."

Nick Ritchie is out of COVID protocol and skated with the team this morning. He may play on Saturday against the Islanders.

Holl and Ondrej Kase remain in Arizona where they tested positive last week.