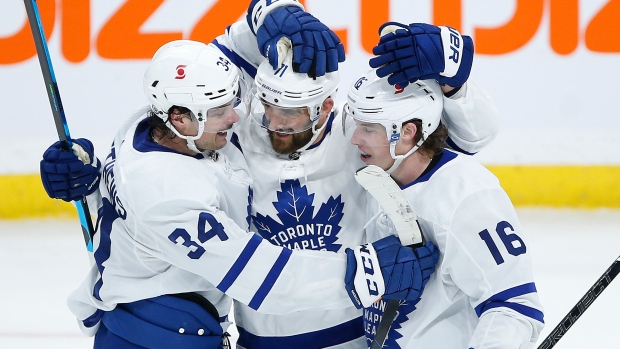 The Maple Leafs held an optional skate at Canadian Tire Centre on Wednesday.

Despite clinching top spot in the North Division over the weekend, the Leafs will not rest any regulars tonight in Ottawa.

"We want to continue to build good habits," coach Sheldon Keefe explained. "Also, we do have something to play for in terms of positioning in the league standings. And then just the reality is with our roster and salary-cap situation, there's not a whole lot of flexibility there in terms of moving things around, so our guys are going to go here today. I'll probably manage the minutes a little bit differently than I would in other types of games. It's a good chance for us to work at our four-line game."

The Washington Capitals leapfrogged the Leafs in the standings last night, pushing them down to seventh place. But Toronto can still finish as high as first overall.

The Knights finish their regular-season schedule tonight while the Avalanche, who own the tiebreaker over the Leafs, still have another game against the Kings.

​"We had a couple great practices here leading up to today," said Keefe. "It's been very businesslike in terms of our approach coming in here. There are two games remaining on the schedule and there's an opportunity for us to continue to climb in the league standings. So, there's a lot of different things here that would be motivations for us to continue pushing. Perhaps the biggest one is with the schedule, it looks like it's going to be late into next week before we get going [with the playoffs] so that's a large gap. We have to stay sharp and stay game ready here so these two games are important for that."

North Division playoffs expected to start next Wednesday, May 19, at least for one of the series.

Jets-Oilers, bring on the old Smythe Division playoffs.
Habs-Leafs for the first time since 1979

The Leafs have been surging down the stretch with a 7-0-1 record since April 22 allowing just 14 goals in that stretch.

"Well, no one talks about it, but they don't give up anything," observed Senators coach D.J. Smith. "They don’t give up a lot of goals. They have the puck a ton, obviously, but if you look down the middle of their ice and on their back end, they’re now starting to look like a veteran team that’s ready to win ... The guys they brought in are good additions. They're hungry. They all know how to play. Their team is now ready and they've gone through the growing pains and gone through some tough losses and they're a team that can certainly win right now."

The Senators have played the Leafs tough this season, going 3-4-1 against their provincial rivals.

Initially listed as game-time decisions, winger Nick Foligno and defenceman Justin Holl are both expected to play tonight in Ottawa.

"We'll see if anything comes up the rest of the day, but both guys responded well from yesterday's practice," Keefe said.

Foligno, who took a quick spin around the ice this morning in a track suit, missed the last two games with an upper-body injury.

The Leafs need only look to their net tonight for additional motivation. Frederik Andersen is making his first NHL appearance since March 19.

"He's a big part of this team," said winger Mitch Marner. "It does a lot for us when he's in that net and so everyone's excited to have the Big Unit back. We got to make sure we play smart and be ready in front of him."

Andersen has faced a long road back from a knee injury.

"I'm sure there's times when he definitely felt by himself or felt lonely and stuff like that, especially when we went on those road trips and he had to stay back," said Marner. "We know what kind of goalie he is in the net for us and what he brings to this team confidence-wise. He's grinded. He's worked his butt off to get back into the shape [where] he thinks he's the best possible goalie he can be."

Keefe announced that the plan is for Jack Campbell to start the regular-season finale on Friday in Winnipeg.

The North Division playoff matchups were confirmed on Tuesday night when the Winnipeg Jets clinched the No. 3 seed. The Jets will take on the Edmonton Oilers. The Leafs will face the Canadiens in the playoffs for the first time since 1979.

"It's the Leafs versus the Habs so it's everything you want in a playoff series," said Dermott. "I mean, you could look at all the history and probably leave it at that, but I think we've had some good battles this year that will add to the fire."

Toronto went 7-2-1 against Montreal in the regular season.

As excitement builds in the fan base, the Leafs are doing their best not to get caught up in the hype.

"I'm not going to talk about the series until the series comes," said Marner. "We got to make sure we come ready to play this Ottawa team."

"I'm just going to focus on the Ottawa Senators here tonight," said Keefe before breaking into a smile. "If I answer those questions, what are you going to ask me for the next eight days or nine days before we start playing?”

Keefe described the focus level of his group as "very strong" saying he sensed a feeling of "unfinished business" even after the club clinched first place in the division.

Even with no fans in the buildings or reporters in the dressing rooms, it may be tough to tune out the buzz ahead of this much-anticipated series.

"I'm sure you can feel the energy in Toronto," Marner said. "Everyone's excited for what we've done this season, but we just got to make sure we keep going and keep working and try to get to that ultimate goal."