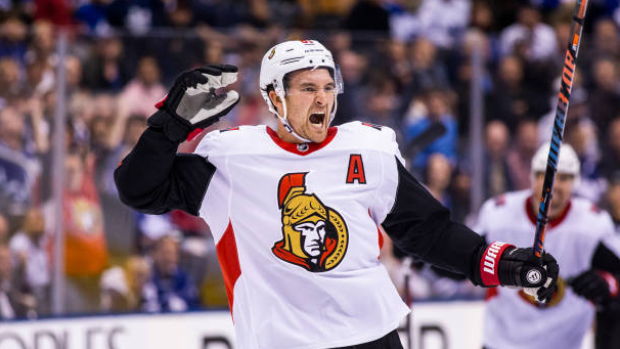 On the evening of April 21, 2012, Ottawa Senators goalie Craig Anderson was preparing for a crucial Game 5 of the team’s Eastern Conference playoff series against the New York Rangers.

The netminder was trying to focus on the task at hand inside the visitor’s locker room at Madison Square Garden, but his eye was drawn to a lanky teenager putting on NHL gear for the first time.

“We’re in the playoffs and my first thought as he was dressing was, ‘Where is this guy from, and what’s he doing here?’” Anderson said.

In hindsight, that would be the last time Anderson ever underestimated Mark Stone.

That night, a 19-year-old Stone – wearing jersey No. 60 in his NHL debut – deftly placed a saucer pass through the legs of Rangers defenceman Ryan McDonagh and onto the stick of Jason Spezza, who promptly beat Henrik Lundqvist for the eventual game-winning goal.

“Coming in as an unknown, I’m sure there was a lot of pressure on him to not feel out of place,” Anderson further explained. “I think he filled in the role great and he continued to improve and became one of the greatest players to ever wear this sweater.”

When Stone makes his return to Canadian Tire Centre on Thursday night, that memorable debut will undoubtedly be a part of the video tribute played in the winger’s honour during the first TV timeout. The Senators could easily post a five-minute tribute to Stone, who had dozens of memorable moments during his seven seasons with the club.

In the age of social media, Stone may have become the most GIF-able player in Sens history – with his passionate and enthusiastic goal celebrations becoming universally adored by Ottawa fans.

“Fans like to see the goal celebrations. Those weren’t manufactured,” said Mark Borowiecki. “That’s truly how excited and passionate he was about putting the puck in the net.”

Borowiecki – who lived with Stone for two seasons when they were AHL teammates in Binghamton – says Stone’s passion for the game doesn’t end with the final buzzer inside the arena.

“The person and the hockey player are very much intertwined. He’s one of the most passionate hockey people I’ve ever seen. He truly lives and breathes the game,” Borowiecki added. “He’s just got hockey running through his body.”

That passion for hockey away from the rink was on full display during training camp in the fall of 2015. Stone was at his Stittsville home on a Sunday afternoon watching NFL football with roommates Chris Wideman and Curtis Lazar, when the doorbell rang. Standing in front of them were six neighbourhood kids with hockey sticks, asking if Stone could come out and play road hockey.

Stone quickly agreed, also convincing his teammates to join him for an impromptu game on the street.

“I don’t think they knew that I was there. Or Wideman or Chiasson. They just asked if Stone could play,” Lazar said at the time.

Stone eventually grew into the role of mentor and teacher for a rebuilding Ottawa team.  Last season, he and his long-time girlfriend, Hayley Thompson, invited 19-year-old Brady Tkachuk to live with them during the teenager’s rookie season in the NHL

“Being new to the league, I’ve never experienced some of the ups and downs that the NHL consists of. Back at the house, he helped me with some little things and just showed me the way,” Tkachuk said of Stone’s influence last season. “He had a huge impact on me and on a lot of guys in this room. I definitely looked up to him and tried to play like him.”

While Stone’s influence on Tkachuk was well-documented, his impact on Colin White was equally pronounced. Last season, with Stone as his linemate for long stretches, White had a breakout season by collecting 14 goals and 41 points – looking like a polished and poised player for the first time in his NHL career.

“He gave me a lot of confidence. He told me not to worry about other things and just play the game,” says White. “He was huge for me. Away from the rink, he lived down the street from me and would have me over for dinner. He became one of my better friends in Ottawa while he was here. He impacted a lot of the young players here.”

Anderson is more than 10 years older than Stone, but that didn’t stop the winger from challenging his netminder’s practice habits.

“If a guy wasn’t pulling his weight, he would be on him. He got on me a few times to battle harder in practice. I’ve taken those lessons,” Anderson said.

Stone’s relentless internal motor garnered instant credibility inside the locker room with his teammates. So when he called out a veteran player for a lacklustre performance, the criticism came with an unspoken authority behind it.

“He’s the kind of guy who’s working hard every day and giving it 100 per cent,” continued Anderson. “You respect a guy when he comes to you and says, ‘Hey man, that’s not good enough.’ It makes you look in the mirror and makes you look at yourself instead of looking outward.”

“The biggest thing that sticks out for me was the consistency. Every day, every game, every practice he did the little things right,” said Chris Tierney. “He had a strong presence in the room.”

Stone possessed many of the qualities of the most popular player in Senators history – Daniel Alfredsson. Both were sixth-round draft picks who emerged into franchise-defining players with their unique combination of talent, work ethic and persona.

While Stone was never anointed captain by the Senators – the club has been without one since the trading of Erik Karlsson – the players inside the room were adamant that Stone was the engine that drove the team.

“He was our leader. Call it what you want, captain or whatever. He was 100 per cent our leader,” Borowiecki said. “When you have that kind of passion and intensity, guys automatically look up to you and respect you. He wasn’t the loudest guy in the room and he didn’t go out of his way to be heard or seen.”

Curiously, Stone never reached any major statistical milestones with the Senators – he played fewer than 400 regular-season games and never reached the 30-goal plateau in any season. And yet, when the video tribute plays in the first period of Thursday night’s game, the crowd inside Canadian Tire Centre will erupt with an ovation befitting of a player with Hall of Fame credentials.

The video tribute is sure to include Stone’s heroics from the Senators improbable march to the playoffs in 2015. While it was dubbed the ‘Hamburglar Run’ because of the stellar play of Andrew Hammond, Stone delivered countless goals and moments during that six-week magic carpet ride.

His overtime goal against the Pittsburgh Penguins in the home finale and his insurance goal at Philadelphia in Game 82 are seared into the collective minds of Ottawa fans.

“He was the engine that drove that. He was the guy making big plays and scoring goals,” said Anderson – who was relegated to the role of spectator during that magical run.”

After a pause, Anderson added, “You need guys like that.”