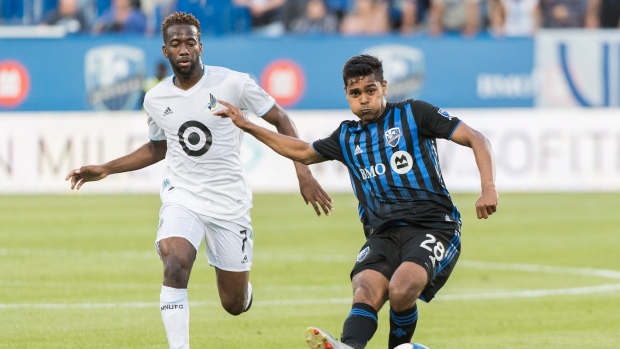 "It hasn't been a good summer for VAR," Bush said. "In many places. I think you're seeing a lot of the issues with it. It can't be that two people working the same game have different opinions on such a match-changing decision. When there's pride involved, it makes it much harder to turn over those decisions."

Minnesota United (9-7-3) striker Mason Toye scored twice to give his team a 3-2 victory over Montreal (9-9-3) at Saputo Stadium Saturday night. But the Impact were not pleased with official Alan Kelly's handling of a penalty given and upheld by VAR before halftime leading to a goal.

"Honestly, (calls) are usually unfavourable for the Montreal Impact. Tonight was just too much, honestly," Impact manager Remi Garde said.

Impact striker Anthony Jackson-Hamel needed less than a minute to score the first goal of the game. The Quebecer ran towards a loose ball, bypassing Minnesota defender Brent Kallman. He then entered the penalty area, cut to his left and beat Kallman again, before slotting the ball past 'keeper Vito Mannone for his third goal of the season.

Nearly eight minutes later, Minnesota equalized with a goal of its own. Following a misplay from Impact midfielder Samuel Piette, Minnesota's Kevin Molino ran upfield and delivered a pass to Toye, who managed to score despite being sandwiched by two Impact defenders.

Montreal's second goal of the game came off a set piece in the 13th minute. Midfielder Saphir Taider whipped the ball into the box off a corner and it was chested down by defender Rudy Camacho. The Frenchman gathered the ball before blasting it past Mannone.

Minnesota, however, tied the game on a controversial call moments before halftime.

Winger Ethan Finlay found himself 1-on-1 with Impact 'keeper Evan Bush. The goalie stuck out his leg to stop the ball, but the referee called a penalty once Finlay went to ground. After reviewing the call through VAR, Kelly upheld his initial call before awarding Bush a yellow card.

Finlay then scored his third of the year, prompting boos from the crowd. Impact owner Joey Saputo, within earshot of the press box, yelled an obscenity before walking down to the pitch to express his displeasure to Garde.

"They went to VAR. It wasn't like it was questioned and then they didn't go to VAR," Finlay said. "They went to VAR, they determined that it was a penalty kick. And I stepped up and I put it in the back of the net. I don't think there's anything for them to be upset about."

Kelly's official reasoning for the call was that Bush was "denying an obvious goal-scoring opportunity for committing a foul while attempting to play the ball."

Toye scored the go-ahead goal, his second of the game, in the 46th minute after receiving a ball from Molino once more. The goal gave Minnesota its first lead of the match after being down 1-0 and 2-1.

Montreal's next game will be the first leg of their Canadian Championship qualifying round matchup against Canadian Premier League side York9 FC next Wednesday. Minnesota will play in the quarterfinals of the U.S. Open Cup against United Soccer League side New Mexico United on the same night.

NOTES: The Impact held a halftime ceremony for former goalkeeper Greg Sutton, who was revealed as the third member of the team's Wall of Fame this week. Sutton, 42, played two stints with the Impact during his playing career, winning a United Soccer League championship in 2004 and a league Most Valuable Player honour the same year.