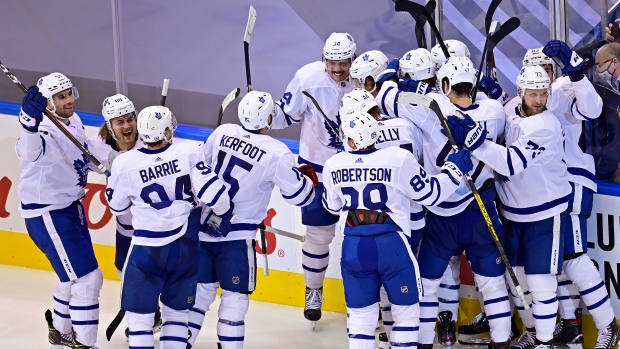 The Leafs’ season looked to be over. From the second period of Game 3 to late in the third period of Game 4, Columbus scored seven straight goals and Elvis Merzlikins stopped 57 straight shots. But then, remarkably, Toronto's high-end talent made some magic. Three goals in three minutes and 34 seconds tied the game and opened the door for No. 34, Auston Matthews, to be the hero in overtime.

And now, Toronto is a win away from one of the most improbable series victories in franchise history.

"We had the belief in our room and on the bench that we could come back," insisted winger Mitch Marner in a Zoom session with reporters on Saturday afternoon. "Obviously, it was crazy that it happened, but we believed from the start."

After wild overtime games on consecutive days, both the Leafs and Jackets stayed off the ice on Saturday. The big question: will what happened on Friday carry over into Sunday's do-or-die Game 5?

"It was a huge boost for us, it gives us great positive momentum," said head coach Sheldon Keefe. "The feeling after the game was tremendous. The amount of joy that I saw from our team is beyond anything I've seen from us. We have to bring that momentum forward here but recognize that it's a new game. We have to have a better start than we did yesterday and we have to recognize that the opposition is going to reset themselves and both teams are going to leave it all out there tomorrow."

“Crazy that it happened, but we believed from the start...”

"Our group's resilient," said Jackets captain Nick Foligno. "If you've watched us at all this year you've seen the things we've gone through, this isn't going to faze us. It was an upbeat group at breakfast today and we know we have a great opportunity in front of us."

Columbus lost Artemi Panarin and Sergei Bobrovsky to free agency last summer and then lost the most man games due to injury in the regular season. Still, here they are, one win from another upset over an offensive juggernaut. But the Leafs feel, like they have all series, that the result is in their hands. They dominated Game 2 and were in complete control in Game 3 before squandering a 3-0 lead of their own.

"It's such a fine line between winning and losing," Keefe noted. "We've seen really good progress in the areas that we really wanted to improve upon as we started at the beginning of camp. I feel like that's given us a chance to win games and that's very positive for us so we're going to be looking at bringing together as much as we can to the final game and really look to bring the whole thing together."

The No. 1 priority at training camp was improving team defence and that remains front of mind.

"We know we can play a great defensive game when we put our minds to it," Marner said. "That's something that we got to make sure we have in our minds ... We can't beat ourselves. Just play smart with the puck. We know that, really, their chances are coming off the turnovers we're giving them."

Foligno was furious at the officials on Friday night after they called a tripping penalty on him in overtime, but the 32-year-old took responsibility on Saturday.

"You just never want to be in that position to put your team in that spot so that's on me," he said. "I'm looking forward to tomorrow. I'm not going to worry about what's gone on in the past. I can't change any that. You take ownership of that and move past it."

The Jackets were short-handed the fewest times in the NHL in the regular season (2.4 per game) but in the Game 2 loss they were whistled six times and in Game 4 they found themselves down a man on four occasions.

"They thrive on the power play," Foligno warned. "They're always looking to try to get calls and that's kind of the engine of their team."

Before the Matthews goal in overtime, Toronto had actually only gone 1-for-11 on the man advantage in the series although Keefe liked the chances they had been generating.

The Jackets’ penalty kill ranked 12th in the regular season (81.7 per cent).

The off day in the series gave everyone a chance to catch their breath and Morgan Rielly likely appreciated the rest. No one played more than him over the last two games as the Leafs alternate captain logged 66 minutes and 17 seconds of ice time. That's 10 minutes clear of the next closest Leaf (Matthews) and almost 15 minutes more than the next closest Leaf defenceman (Tyson Barrie).

"He's just getting better and better every game," said Keefe. "He seems to be more and more comfortable in his skating. Certainly in the last two games, the way he skated up and down the ice and getting involved both offensively and defensively, I think he looks really, really comfortable in that regard. In my mind, he has taken a really big step here in particular since our loss of [Jake] Muzzin."

Seth Jones led the way for the Jackets playing 65 minutes and 51 seconds in the last two games.

In the aftermath of Friday's crazy comeback, Leafs players paid tribute to 37-year-old Jason Spezza, who fought figuratively and literally to keep the season alive. He dropped the gloves with Jackets defenceman Dean Kukan in the second period, only the seventh fight in Spezza's NHL career, which has spanned 18 years and more than 1,100 games.

"Just trying to spark the guys," Spezza explained. "I think just trying to show some desperation and have some push back. Sometimes without the crowd you don't have that so just trying to create some emotion and play the role that I'm in and just try to get everyone going. You're just trying to do what you can do at this time of year."

Spezza signed a bargain-basement contract to play with his hometown team this season as he chases an elusive Stanley Cup.

"He wants it more than anyone," said winger Zach Hyman. "He's been in the league so long. He was a first-line player throughout his career, an all-star, and now he's on the fourth line and willing to drop the gloves. He's a real leader on our team ... we all love him."

Spezza's play has also improved with each passing game in this series. In Game 1, remember, he played just three minutes and 53 seconds failing to get a shot on net. On Friday night he played 10 minutes and 37 seconds while firing three pucks on net and dominating possession alongside Kyle Clifford and Pierre Engvall.

"That line, just in general last night, was doing a lot of great things for our team," Marner said. "They were really producing a lot in the O-zone, really controlling the play in the O-zone."

They were doing such a good job that Keefe even sent them over the boards late in the third period when the big boys needed some rest amid that frantic final push.

"It speaks to how they were competing and the impact they were making on the game yesterday," the coach said. "It's a credit to that entire line but Spezz definitely brings a lot to our group and through this whole pause and getting our team organized and motivated."

After refusing to answer questions and speaking only 23 words in his Zoom session last night, Jackets coach John Tortorella got a day off from his media duties on Saturday. Instead, general manager Jarmo Kekalainen took the podium. He did not have an update on defencemen Zach Werenski, who exited Game 4 in the third period with an upper-body injury, or Ryan Murray, who missed the game altogether.

Any optimism that those guys will play on Sunday?

"I guess we'll always be optimistic, but I can't answer that any further," he said.

TSN insider Darren Dreger reported that Werenski, who led all NHL defencemen with 20 goals in the regular season, was due for an MRI on Saturday afternoon.