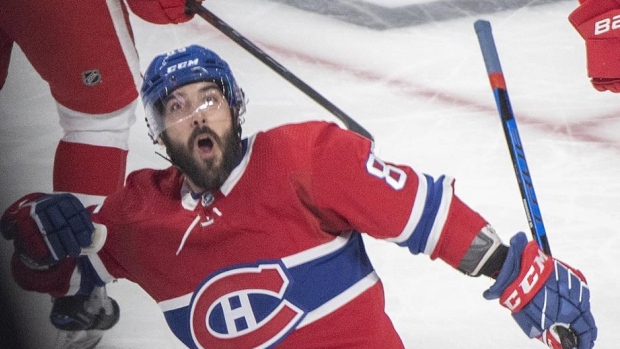 MONTREAL — A week ago, Mathieu Perreault was a healthy scratch for the Montreal Canadiens. Saturday night, he became a hat trick hero in front of his home fans.

In Montreal's decisive 6-1 victory over the Detroit Red Wings, Perreault became the first Quebec native to score a hat trick for the Canadiens (1-5-0) at home since Vincent Damphousse in 1998.

Born and raised in Drummondville, Que., Perreault admitted that the Bell Centre crowd chanting his name was a special moment in his career.

“You don’t even dream about moments like that,” Perreault said. “You just dream about being in the NHL, maybe have a chance to play for the Canadiens but to actually score a hat trick in your home building, it's not even stuff you dream about so it’s an unbelievable feeling.”

“It’s something I may never experience again so I was just trying to take in as much out of it.”

Head coach Dominique Ducharme knew Perreault from his time spent coaching the Drummondville Voltigeurs of the Quebec Major Junior Hockey League where Perreault would train during the summer.

Ducharme said both men spoke during the off-season about how signing in Montreal meant he could be a healthy scratch, but also a valuable asset to the squad. For Ducharme, Perreault’s patience and work ethic paid off.

“You can tell that he’s proud to wear that jersey,” Ducharme said. “You could see his smile and how happy he was on the ice during the player presentation and he was rewarded tonight.”

After starting the season with an 0-5 record, the Montreal Canadiens found their first win in the last contest of their four-game home stretch.

It was a night of firsts at the Bell Centre. Perreault, Christian Dvorak and Mike Hoffman all scored their first goals in Canadiens uniforms. Defenceman Sami Niku also earned his first points in his first start, finishing the night with two assists.

“It’s good to get that first one but the one thing now, the reason it will make us better is that we don’t want to go back,” Ducharme said. “Nobody wants to have that feeling again. It was the longest 10 days.”

Montreal’s Jake Allen turned away 26 of the 27 shots sent his way.

Montreal gave up a power play early in the first period and the Red Wings took no time to find the opening goal. Dylan Larkin beat Allen with a laser into the upper right-hand corner of the net.

“It’s easy to say but we told ourselves that whatever happened we would focus on our process and that we’d look at the scoreboard at the end of the game to see the final result,” Ducharme said. “We came back with two goals in the first period. It felt good to play with a lead and to be able to build our play.”

Ben Chiarot responded for the Habs with 5:50 to go in the first period. The defenceman took a cross-ice pass from Jonathan Drouin and levelled the score at one.

The Canadiens scored two goals in a game for the first time this season when Hoffman opened his Montreal account. On the power play, Hoffman’s low shot from the top of the right face-off circle proved too much for Greiss.

Montreal notched a third unanswered goal in the second period. Detroit’s Marc Staal redirected a nifty Habs passing sequence into his own net. Dvorak was credited with the goal, his first in a Canadiens uniform.

Perreault added his two first goals in a Canadiens uniform in just over two minutes. He took advantage of a turnover to drive the puck to the net, then beat Greiss at 7:45 of the second.

Perreault notched a second goal at 9:59, putting the Habs up 5-1 and forcing Blashill to pull Griess in favour of Nedeljkovic.

Perreault ended his dream night with a goal at 13:16 of the third for his third career hat trick.

This report by The Canadian Press was first published Oct. 23, 2021.