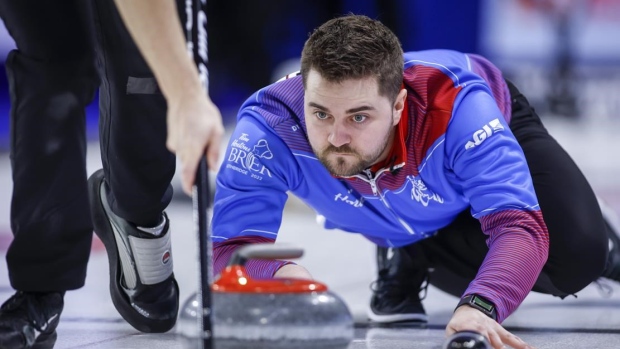 The Winnipeg foursome won their second straight bonspiel, taking out provincial rivals Team Reid Carruthers, 7-2, in the final of the DEKALB Superspiel from the Morris Curling Club in Manitoba.

A perfect finish to a perfect SuperSpiel!
We had 6-0 record in our 2nd straight title of the year.
Thanks to DEKALB, the Morris Curling Club & our fans for a great event.
We're in Oakville, ON for Game 1 of the @grandslamcurl Tuesday morning.#KIOTI #WeDigDirt pic.twitter.com/B9dVoxGPCI

Dunstone put up three spots in the second and fifth ends which led to early handshakes and a perfect 6-0 record for the tournament. Dunstone's group also defeated Winnipeg's Team Braden Calvert in the quarterfinal and Winnipeg's Team Ryan Wiebe in the semifinal.

The new-look squad featuring 27-year-old Dunstone at skip, B.J. Neufeld at third, Colton Lott at second and Ryan Harnden at lead, have been the hottest team on the men's curling tour all season. They have now qualified for four straight finals, winning the last two, and are currently on a 13- game win streak. For the season, Team Dunstone have appeared in seven events, making five finals and two semifinals and own a total record of 37-11.

Team Dunstone, ranked first in Canada, are now heading to Oakville, Ont., for this week's Grand Slam event and should be considered top contenders for Manitoba's Brier playdowns in early February.

On the women's side of the draw at the DEKLAB Superspiel, Winnipeg's Team Abby Ackland defeated Saskatoon's Team Nancy Martin in the final, 7-3.

On the women’s side, Winnipeg’s Abby Ackland defeated Saskatchewan’s Nancy Martin 7-3 in the final. Big win for the young team. They have a shot at a Scotties wildcard spot if they don’t get through the province. #wfp https://t.co/s51PXgwOOw pic.twitter.com/86bwtRS9ZW

Down 3-2 after five ends, Ackland scored four in the sixth end followed by a steal of one in the seventh en route to her team's first bonspiel victory of the season.

The foursome also defeated Lethbridge's Team Casey Scheidegger in the quarters before ousting Vancouver's Clancy Grandy in the semis. Scheidegger and Grandy are ranked fifth and sixth respectively on the Canadian Team Ranking System.

Winnipeg's Team Jennifer Jones were also at this event as the new-look foursome dropped a 6-4 decision to Team Martin in the semis.

Ackland, third Meghan Walter, second Sara Oliver and lead Mackenzie Elias had previously lost in three finals this season ahead of arriving in Morris for the DEKLAB Superspiel.

Team Ackland should see their ninth-place ranking in Canada increase after Monday's victory.

Gim and her team from Uijeongbu, South Korea dropped their opening game in Brantford before reeling off six straight victories to secure their third bonspiel victory of the 2022-23 season. Team Gim have been very busy this fall, playing in 11 events with an overall record of 50-17.

On the men's side of the draw, Grimsby's Team Pat Ferris edged out Montreal's Team Felix Asselin, 5-4, in the final by scoring a deuce in the last end. It was their second bonspiel win of the season.