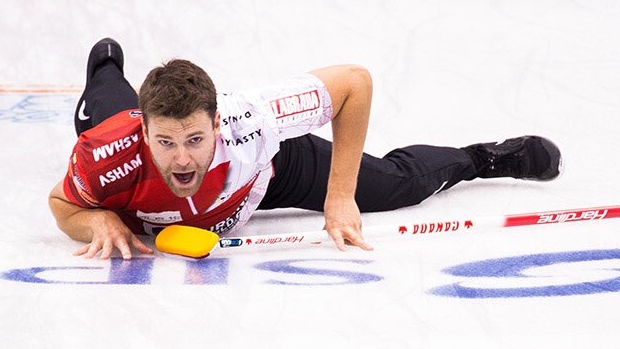 Matt Dunstone is adding a provincial rival to play for his Regina-based rink next season as the march to the 2021 Roar of the Rings Olympic trials continue.

Kirk Muyres, who has skipped his own team in Saskatchewan for the past two seasons, is coming aboard to play second for Team Dunstone after they cut ties with Catlin Schneider earlier this week.

"Kirk’s experience and success at the third and skip positions make him one of the most well-rounded players in our sport. We’re very excited to see how he becomes one of the best seconds in the world," said Dunstone on Facebook. "I am most looking forward to chasing down a Brier gold for Saskatchewan and also our collective dream of becoming Team Canada at the Olympics with Kirk onboard!"

The excitement of a new season carries great anticipation. And that’s the case for us in 2020-21 after adding one of @CURLSASK's very best.@kirkmuyres will be joining us at second and we are super excited to join forces.

Dunstone and Muyres have squared off in the last two provincial finals with Muyres winning in 2019 and Dunstone taking this year’s title. Muyres, a 29-year-old from Saskatoon, has five Brier appearances to his name, including three as a third, one as a second and one as a skip. The pair even represented Saskatchewan together at the 2018 Brier in Regina as members of Team Steve Laycock. They made it to the championship round but missed the final four with a 6-5 record. As a skip, Muyres once again made the championship pool at the 2019 Brier but didn’t qualify for the playoffs with a 5-6 showing.

"I can’t wait to start this next chapter of my career with Matt, Braeden and Dustin," Muyres said. "This team has shown they can play and win in the big moments, while competing with consistency against the very best teams in the world. The goal has always been to win the Brier and Olympic Gold for Saskatchewan and I believe this group has the tools to do it. I am excited to bring my experience as a third and skip to help this team excel in any way I can."

Muyres finished third at the 2015 Canadian championship in Calgary (playing on Team Laycock) and won the bronze medal with teammate Laura Walker at the 2018 world mixed doubles championships. Muyres and Moskowy won the 2011 Canadian junior title and finished fourth at that year’s world junior championships.

So pumped to be reunited with this guy 9 years later & welcome him to the squad! Can't wait to get to work. pic.twitter.com/OMEwaxAMLQ

Team Dunstone had a breakout campaign in 2019-20, winning their first Grand Slam at the Masters in October before putting a terrific week together at the Tim Hortons Brier in Kingston last month. They posted an 8-3 record through the championship pool, good enough to book a spot in the 1 vs. 2 page playoff against Alberta's Team Brendan Bottcher. Dunstone fell to Bottcher and then dropped a semi-final clash to eventual champion Brad Gushue.

Schneider, 28, had spent the past two seasons Dunstone’s team.

"I can’t thank Catlin enough for the hard work and dedication he put into our team over the last few years," Dunstone said on Facebook. "I am thankful for the big moments and the big wins we shared together along the way. He is a talented, dedicated player and we wish Catlin nothing but the best moving forward."

The prairie province hasn't won the Brier Tankard in four decades since Rick Folk accomplished the feat in 1980.