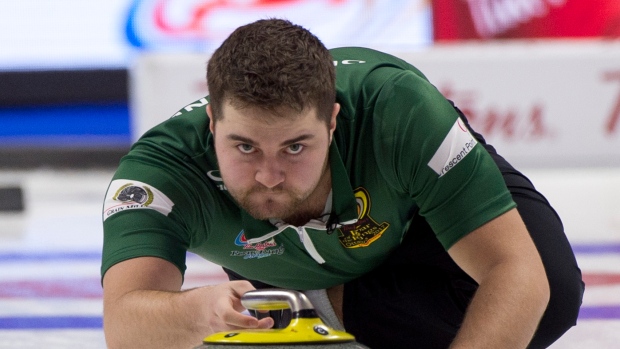 Matt Dunstone and his new-look Winnipeg foursome have finally entered the winner's circle after a slew of close finishes.

The fourth time's the charm! It was our new crew's 4th appearance in a final, and today we got the win!
Thanks to @rdclassic22 for putting on a great event!
And thanks to our family and fans for all your support. We feel it!#KIOTI #TeamDunstone #WeDigDirt pic.twitter.com/qN7loOQML0

Dunstone and company had dropped three championship games and two semifinals in their previous five events this season.

In the Red Deer final, the 27-year-old Dunstone needed just five ends to dispatch the veteran Koe, scoring three in the second and three more in the fourth end.

Team Dunstone, who are currently ranked second in the country, went an impressive 7-1 in Red Deer, including a 4-0 shutout of Edmonton's Team Brendan Bottcher in the semifinal.

Dunstone has been stellar with his new team this season and owns a 38-12 record.

Koe, who's now playing with third Tyler Tardi, second Bradley Thiessen and lead Karrick Martin, had a strong week as well, highlighted by a 6-5 victory over Team Tanner Horgan in the other semifinal.

Elsewhere, Team Colton Flasch lost to Team Bottcher in the quarters while Team Reid Carruthers went 1-3 and missed the playoffs.

Another event, another win for the new-look Team Rachel Homan.

Team Homan got the better of Team Jessie Hunkin in the quarters and Team Tabitha Peterson in the semis while Scheidegger's crew had to get past Team Kaitlyn Lawes and Japan's Team Satsuki Fujisawa in the playoffs to get to the final.

The Ottawa-based foursome, featuring fourth Homan, new skip Tracy Fleury, second Emma Miskew and lead Sarah Wilkes, won all six games in Red Deer and have now won a total of nine games in a row dating back to last month's Tour Challenge victory on the Grand Slam circuit. They own a 23-5 record in 2022-23.