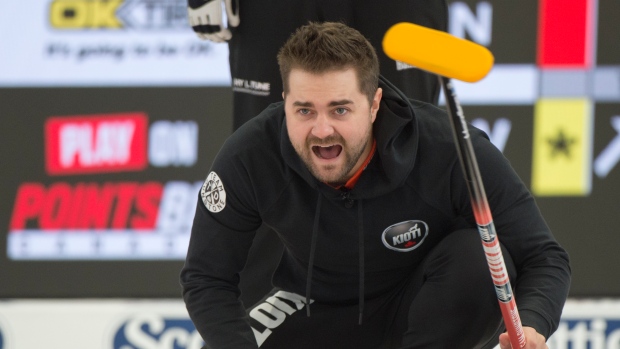 A strong start to the season has launched the new-look Matt Dunstone team past the rest of the Canadian competition on the world men's curling rankings list.

Dunstone is the top domestic entry on the World Curling Federation year-to-date list at No. 2 behind reigning world champion Niklas Edin of Sweden.

The 27-year-old resident of Kamloops, B.C., won seven straight games to capture the recent Red Deer Curling Classic. It was the third straight final appearance for a team that has opened the campaign with a 34-12 record.

"We found our roles within this team pretty quickly," Dunstone said. "(We know) what each guy needs to do to make the other guy go. That stuff came quite easy. There's no egos on this team and guys just work hard."

Dunstone reunited this season with junior teammate Colton Lott, who plays second on a squad that includes veterans B.J. Neufeld at third and Ryan Harnden at lead.

"It's come together a little bit quicker than I think we all would have assumed," Dunstone said. "But we're pretty excited about the start."

Dunstone blanked Brendan Bottcher 4-0 in the semifinals at Red Deer and dumped Kevin Koe 8-2 in the final.

World silver medallist Brad Gushue is No. 3 on the WCF top-10 list that includes three other Canadian teams. Koe is fifth, Bottcher is seventh and Reid Carruthers is 10th.

The WCF also has a 'total rankings' category that includes the best four results this season and uses a percentage of last season's points.

Gushue tops that list ahead of Edin, Scotland's Bruce Mouat, Bottcher and Dunstone, who won a U Sports title at the University of Manitoba in 2014 and is a two-time national junior champion.

Lott and Dunstone remained good friends when they played on different teams after juniors. The addition of Harnden and Neufeld — both former national champions — has also been smooth, Dunstone said, with everyone learning from each other as they go.

"There's still a lot of stuff this team has to work on to get where we want to get to," Dunstone said in a recent interview. "But I think this start provides us all the feedback we need to know that we have exactly what it takes to achieve the goals we want.

"So if anything, it's going to give us a lot of confidence and continue to make us hungry because ultimately this team wants to get to the top."

Dunstone's team plans to play a tour event in Morris, Man., this weekend ahead of the Grand Slam's Masters next week in Oakville, Ont.

The World Mixed Doubles Qualification Event is set to begin Friday at the Dumfries Ice Bowl in Scotland.

A total of 26 teams are entered in the qualifier, which will use a four-group round-robin format.

Canada has already secured a berth in the world championship.

This report by The Canadian Press was first published Dec. 1, 2022.