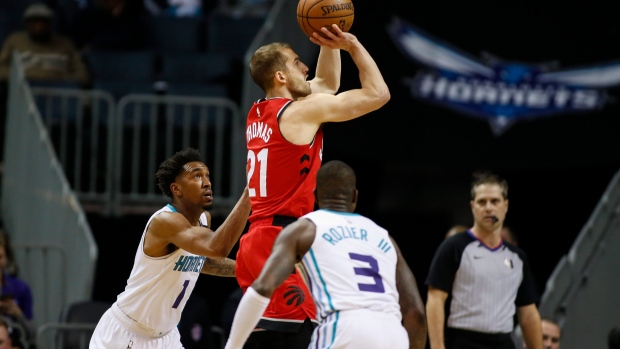 TORONTO – Given all of the challenges that the Raptors present to opposing defences, it’s hard to imagine that sparingly used guard Matt Thomas was featured heavily in Milwaukee’s scouting report going into Tuesday’s battle of Eastern Conference titans.

If you’re game planning for Toronto, you’re almost certainly starting with the team’s budding superstar Pascal Siakam. From there, you’re worrying about Kyle Lowry and Fred VanVleet and Serge Ibaka, and so on – they’re one of the deepest clubs in the NBA.

But Thomas? The 25-year-old rookie is averaging just 10.3 minutes per contest and has sat out of more games than he’s played in this season. His role has fluctuated, he’s bounced in and out of Nick Nurse’s rotation, and he missed significant time with a fractured finger.

You can understand how he would have evaded the Bucks’ radar, but his name is one they’re unlikely to forget after his brief, but impactful, stint in the first half of Milwaukee’s 108-97 victory in Toronto.

Thomas checked in to begin the second quarter. After picking up a couple quick fouls, the Raptors’ sharpshooter came off a good screen set by Rondae Hollis-Jefferson to drill his first jumper, a three-pointer from the elbow. On the next possession, Lowry found Thomas open in transition and he hit another, forcing Bucks coach Mike Budenholzer to call a timeout.

Clearly a topic of conversation in the huddle, the Bucks had a defender draped all over Thomas, but after using a screen from Chris Boucher a minute later, he drilled his third consecutive three. Toronto’s lead, which was two points when Thomas entered the game, grew to nine after that bucket and was as large as 12 in the quarter before Milwaukee seized momentum going into the halftime break.

“I think my minutes have been so up and down that I probably miss [coming up on] the scouting reports of some of the teams we’re playing,” said Thomas, following Toronto’s Thursday morning practice. “But as games go on, especially against Milwaukee, they defend me differently in the second half than they did in the first half. I’m sure that may continue to ramp up as the season goes on and obviously in the playoffs.”

Undrafted out of Iowa State in 2017, Thomas spent a couple seasons playing in Spain, where he became known as one of the best shooters outside of the NBA. He finally got his opportunity in the league when the Raptors signed him over the summer, and his most lauded skill has certainly translated.

Through 27 games, Thomas is shooting 34-for-66 from beyond the arc and leads the NBA in three-point percentage (52 per cent) among players that have attempted at least 50 treys.

While opposing teams may not be spending time preparing for him directly, most of them know what he’s looking to do – and what Nurse wants him to do – when he comes into a game. He’s out there to stretch the floor. He’s out there to shoot. Generally, that means those shots aren’t going to come easy. Teams will face-guard him and make sure he doesn’t have much time or space to square up and release the ball.

“They certainly know,” Nurse said. “Sometimes a guy will come in that hasn’t played in forever and the guys are immediately asking, ‘Hey, we didn’t cover this guy in the scouting. Who is he? What’s he do?’ And you’re saying, ‘Shooter, you got to press up on him.’ They’re going to get some information on him.”

He’s made the adjustment, though. Nurse compares him to veteran shooter J.J. Redick in the way he’s learned to move without the ball, come off screens, find separation and get the shot off.

A natural shooter, Thomas doesn’t have a strict regimen in terms of the number of jumpers he fires up per day, like some guys do. He doesn’t count them. Instead, he “listens to [his] body” and goes by feel. Some days that means getting up more shots, some days it’s less.

Even as word is starting to spread around the league – he can shoot the hell out of the ball – Thomas doesn’t want to be typecast. He’s shown that he can capably put the ball on the floor and pull up from mid-range when his defender closes out.

But, more than anything else, he’s tried to prove himself on the defensive end. That was the knock on him coming into the league and the big question entering his rookie campaign: could he guard his position well enough to stay on the floor? It’s something he’s worked hard on throughout the year, especially when he was out with the finger injury and couldn’t shoot.

“I’ve always had the ability to make shots, and all the footwork and flying off screens,” Thomas said. “I’ve done that stuff for a number of years. Defence, I still have a lot of room to improve and I know that and I’m going to continue to work on that side of the floor. But I think I’ve made good strides this year in that area.”

Sometimes Thomas will ask a teammate to play one-on-one after practice to help him work on his defence. He also watches plenty of film. But there’s another important part of his routine that he brings up: meditation.

“I need to be more consistent, but it’s one thing I try to do in the morning,” he said. “It helps me with my clarity and my decision-making. I feel like my interactions with people are better and how I feel about my day when I’m in tune with myself.”

How much has Thomas’ role fluctuated this season? Just take the last six games, for instance. With the team undermanned, he’s gotten a chance to play in each of them – his longest stretch of consecutive appearances since November. However, in three of those contests he logged fewer than three minutes, with all of his run coming in garbage time. In the other three, he totalled 41 points in 49 minutes, shooting a remarkable 11-for-16 from three-point range.

On Thursday, Nurse indicated that Thomas’ recent play should earn him more time. Although, it could be difficult to find him minutes with a couple players at his position nearing a return from injury. Patrick McCaw, who has been out with an illness, is expected back on Friday when Toronto hosts the Charlotte Hornets, and Norman Powell, who’s missed the last month with a broken finger, shouldn’t be far behind (he’s listed as questionable for Friday’s game).

At full strength, Thomas probably slots in as the Raptors’ 11th or 12th man, but Nurse has shown a willingness to tinker with his rotation and keep things fluid, especially when somebody is performing well enough to force his hand. Thomas’ role will likely continue to be situational. Still, as the season rolls on and even going into the playoffs, having one of the best shooters in the world sitting on your bench, ready to come in and potentially shift the momentum of a game at a moment’s notice, is a pretty nice luxury.

“I said it when I first got here – I’m open to anything,” Thomas said. “I’m just here to help this team win. Whether I’m on the bench supporting and waving a towel and cheering guys on, or I’m on the court competing and trying to knock down shots and defend. Whatever my role is that day, I’ll make sure I’m ready to contribute.”​