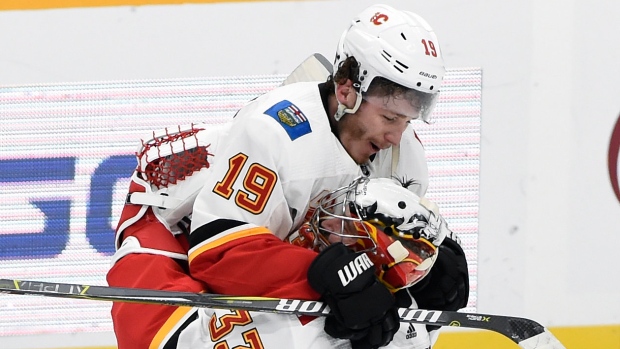 Then, he scored a pair of improbable goals for a come-from-behind win.

Calgary rallied from a three-goal deficit after Nashville took the game's first 14 shots.

"I didn't think it was going to be possible after the first 20 minutes or first 10 minutes," Tkachuk said. "We were all over them in that third period and that's the way we need to be to be at our best."

On the winner, Tkachuk skated in front of the net against two Nashville defenders, let the puck slip between his legs and flipped a shot that beat Predators goalie Pekka Rinne high to the stick side.

"I think this comeback kind of gives us confidence that we can be down in the third, even though we don't want to be, and we can come back," Tkachuk said. "So I guess that's the positive we can take."

Tkachuk's rebound goal with 40 seconds left tied the game at 5 and forced overtime.

Lindholm scored his team-leading ninth goal from close range, narrowing the gap to 4-3 of the third period.

"A lot of good things in the third period and it looks a lot more like us, right," Flames coach Bill Peters said. "We put the work boots on and played with some speed and possessed the puck. It should be a springboard to bigger and better things."

Calgary didn't take its first shot until about six minutes remained in the first period.

Bonino gave the Predators a 1-0 lead when he scored on a backhanded rebound at 5:33 of the first period.

It was his fourth straight goal, including a hat trick in Nashville's 3-0 win over Chicago on Tuesday. The centre leads the Predators with seven goals.

Watson scored on assists from Colton Sissons and Matt Irwin, increasing Nashville's lead to 2-0 at 10:15 of the first.

Ryan scored on the Flames' second shot, a wrist shot from the bottom of the left faceoff circle, narrowing the gap to 2-1 at 15:27 of the first.

Calgary almost tied it when Johnny Gaudreau's wrist shot bounced off the right post before Rinne smothered the rebound in the crease 18 minutes into the first.

The Flames missed another chance to tie when a shot hit the post again early in the second period.

Jarnkrok scored his first short-handed goal on a 2-on-1 breakaway after a Calgary turnover, sending a wrist shot into high near post past Rittich, boosting Nashville's lead to 3-1 at 4:36 of the second period.

Jarnkrok scored his second short-handed goal on another 2-on1 after a Flames turnover, firing a wrist shot from the bottom of the left faceoff circle past Rittich for a 4-1 lead at 18:52 on the second.

Anderson narrowed the deficit to 4-2 in the third.