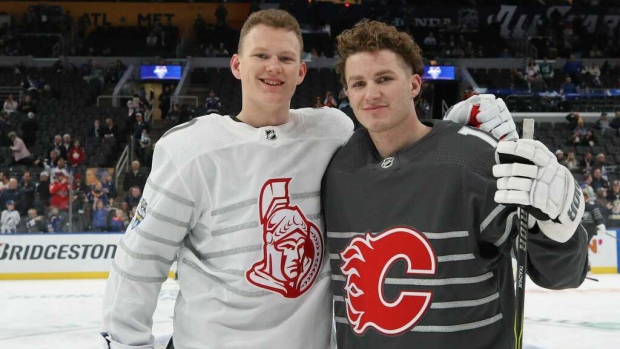 ST. LOUIS — It was the juicy moment the hockey world was drooling to see: a give-and-go goal between Matthew Tkachuk and Leon Draisaitl.

Tkachuk undoubtedly heard the off-the-cuff comment from Leon Draisaitl, who was wrapped up in the emotion of a reignited Battle of Alberta.

“I’d probably get off the ice,” Draisaitl said on Jan. 14, when asked how he would handle playing alongside Tkachuk on the same Pacific Division team.

That’s exactly what Tkachuk did.

There was no celebration after the goal, no glove-tap. Tkachuk skated right off the ice to the bench, leaving Draisaitl with no choice but to grin - and maybe offer a choice word.

“I guess I expected that,” Draisaitl said, smiling. “I probably would’ve done the same.”

Yep, hockey’s perfect villain relished his latest role in his hometown at the 2020 All-Star Game.

Tkachuk put the exclamation point on what was really the Tkachuk Show in St. Louis, putting aside an ill-tempered rivalry for a few days to post six points and help the Pacific to a $1 million cheque and the division’s third win in the five years of the 3-on-3 tournament format.

Bruins sniper David Pastrnak, the Rocket Richard Trophy leader at the break with 37 goals, was voted the All-Star Game’s MVP in a losing effort. Pastrnak posted four goals and two assists in 40 minutes of work.

One of the Tkachuk boys was guaranteed to win at Enterprise Center with Matthew squaring off against Brady and the Atlantic Division in the championship. Big brother got the best of little brother once again, the Flames’ Matthew stripping the Sens’ Brady on a backcheck and producing a goal at the other end.

“I was backchecking harder than I do in a normal game,” Matthew said. “I was definitely not taking it easy on him. I wanted the money tonight.”

Tkachuk celebrated the end of a whirlwind weekend the only way a St. Louisan should in the home of Anheuser-Busch: with a Bud Light sitting in his stall.

On a weekend where everyone kept an eye on the interactions between the Oilers and Flames contingents, possibly hoping for some old school animosity, there were just laughs.

The Alberta beef will resume again in ill humour with two meetings this week, as Zack Kassian returns from his two-game suspension for using Tkachuk as a punching bag, but it was put aside for three days of forced niceties in the Gateway City.

“The hockey community is funny like that,” Rangers forward Chris Kreider said. “You go to war against guys one night and hang around and share stories the next night.”

Maybe it shouldn’t have been a surprise, then, that the story in St. Louis was that the Pacific Division - where five playoff teams are separated by one total point - was the one that showed up to compete.

Flames captain Mark Giordano said he had to stop himself from the habit of laying out to block shots in the final minutes with $1 million at stake.

“Everyone wants to win,” Connor McDavid said, “especially when there’s a couple bucks on the line. Tonight was fun.”

How did the Pacific get it done?

“I want to say it was our team spirit,” Draisaitl said. “You’re here to have a good time. Things like that [rivalry vitriol] happen from time to time, but this is not the time to be grumpy or whatever it is. Our team, everyone here, I think had a great time. So it was a lot of fun.”

“There’s no egos in there,” Pacioretty said. “I can’t say enough good things about all of the guys in there.”

But on this weekend, two of the NHL’s larger-than-life personalities in the Tkachuks shined brighter than the rest. There is always question marks about player buy-in for the midseason, made-for-fans event. But the Tkachuks were all-in for their first All-Star weekend - and likely their only All-Star Game in their hometown.

From Matthew pulling off his Flames jersey to reveal a St. Louis Cardinals shirt at Friday night’s Skills Competition, to firing pucks alongside their father in the Shooting Stars event, to Brady going toe-to-toe with Matthew for the prize - it was a weekend they will never forget.

“I loved everything about it, honest to god,” Matthew said. “The hype around it, it was crazy. It was super, super cool. It was a really special weekend and a lot of fun to be a part of and something that I will cherish for a while.”