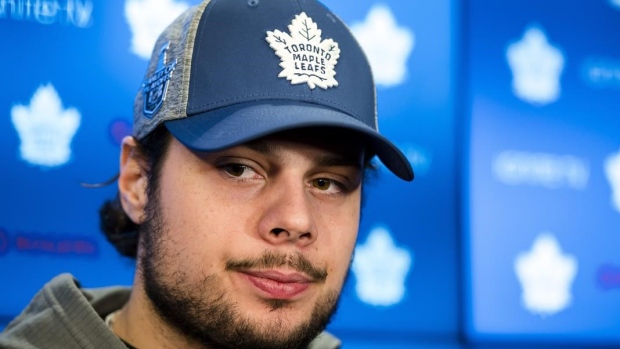 Toronto Maple Leafs star Auston Matthews is facing a disorderly conduct charge in relation to an alleged May incident in his hometown of Scottsdale, Ariz.

The odds-on favourite to be named the next Maple Leafs’ captain and a group of friends allegedly attempted to open the vehicle door of a female security guard around 2 o’clock in the morning on May 26.

Upon being confronted by the female security guard, Matthews then allegedly “pulled his pants down, bent over and grabbed his butt cheeks” as he was walking away, according to a police report.

The complainant said Matthews was wearing underwear at the time. A police officer later observed building surveillance video which showed a man ­– confirmed by a building manager to be Matthews – walking toward the elevator with his pants “at his ankle.”

Court documents show a hearing related to the case is scheduled for Scottsdale City Court on Wednesday morning. Matthews is not required to appear.

The Maple Leafs issued a statement on Tuesday night acknowledging the pending charge.

“The Toronto Maple Leafs are aware of the complaint of disturbing the peace against forward Auston Matthews,” the statement read. “Auston is cooperating fully with the relevant authorities but neither he nor the Club will comment any further out of respect for the process involved.”

Matthews’ agent, Judd Moldaver of Wasserman Sports / Orr Hockey Group, did not immediately respond to a request to comment from TSN.

The female security guard, identified as Fayola Dozithee according to the Scottsdale Police Department report, filed the complaint on May 28 and requested to press charges, two days after the alleged incident.

Dozithee told the responding officer that she told Matthews and his friends, “I am a female, I am a military vet with sever [sic] PTSD” and that it “wasn’t funny, how could they think it would be funny to get in a female’s vehicle at 2am.” Dozithee told the officer that "no one should be put through that type of situation."

Dozithee also told the officer that the “group of males appeared to be intoxicated.”

According to the report, the investigating officer attempted to contact Matthews on May 30 and again on June 19, both times unsuccessfully.

One count of disorderly conduct - disruptive behavior was filed by an Arizona prosecutor on July 23. Disorderly conduct is a Class 1 misdemeanor in Arizona, which carries a maximum of six month in jail and up to a $2,500 fine.

Matthews, who turned 22 on Sept. 17, was born in San Ramon, Calif., but moved to the Scottsdale area at an early age and played his youth hockey hockey for the Arizona Bobcats.

Matthews is entering the first season of a five-year, $58.17 million contract he signed with the Leafs in February.

Here is the full police report: 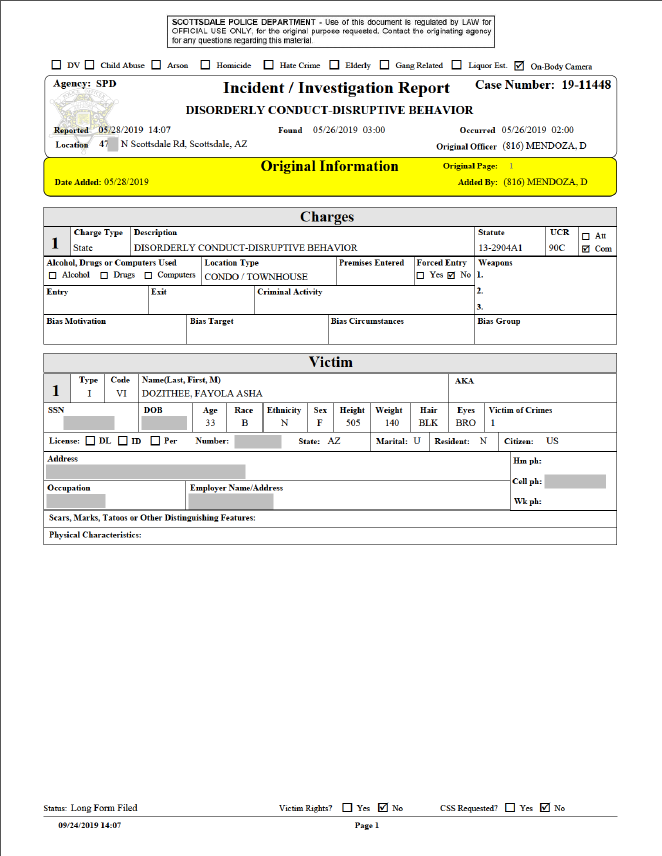 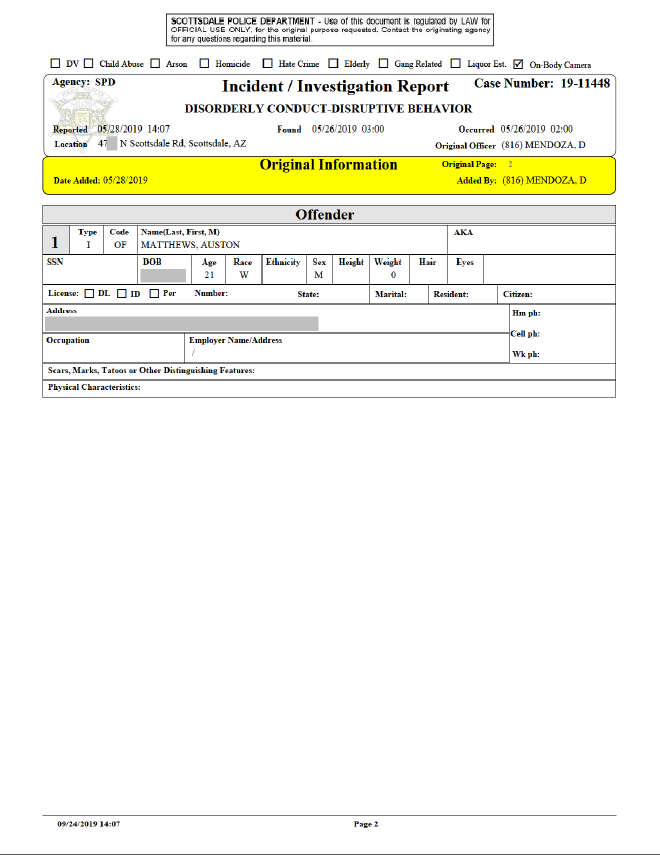 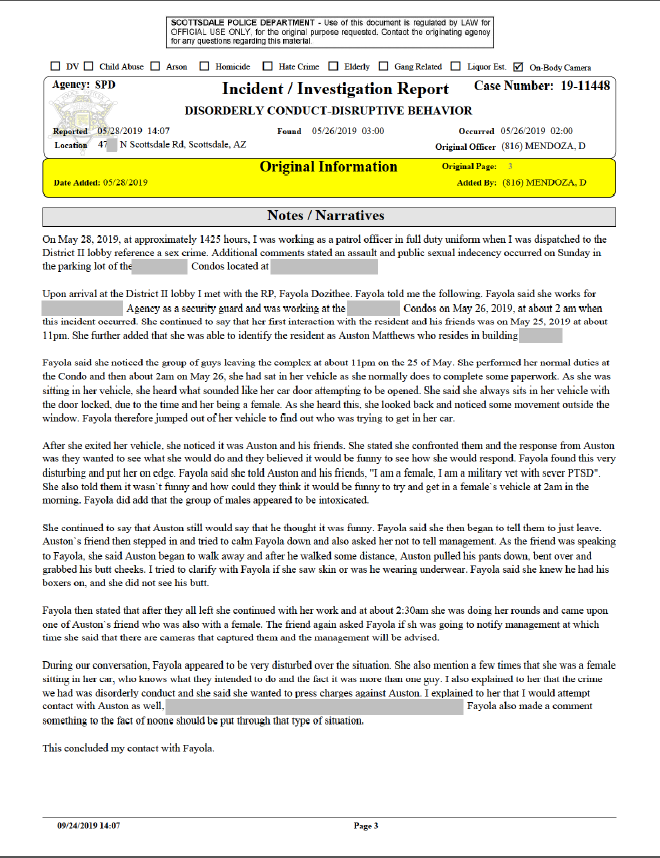 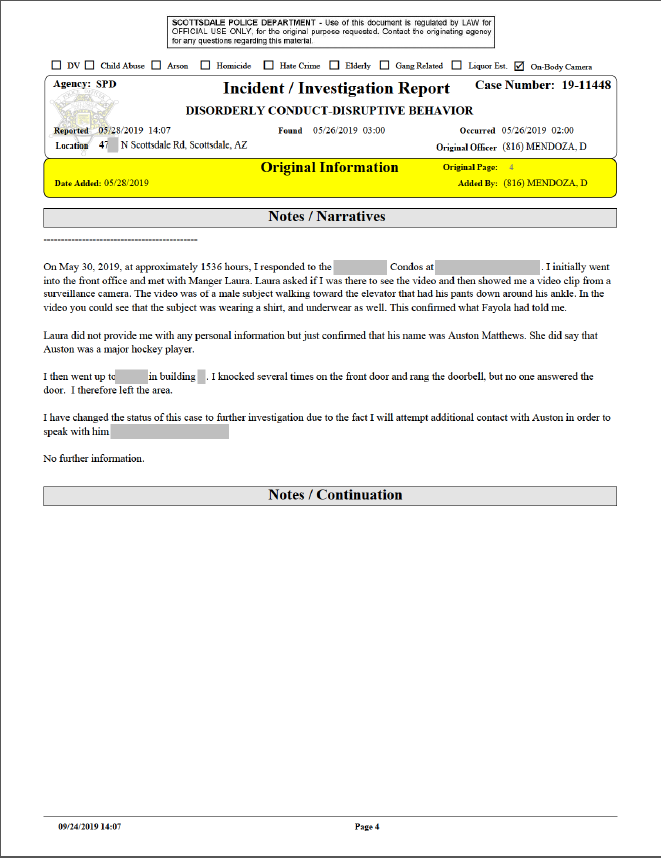 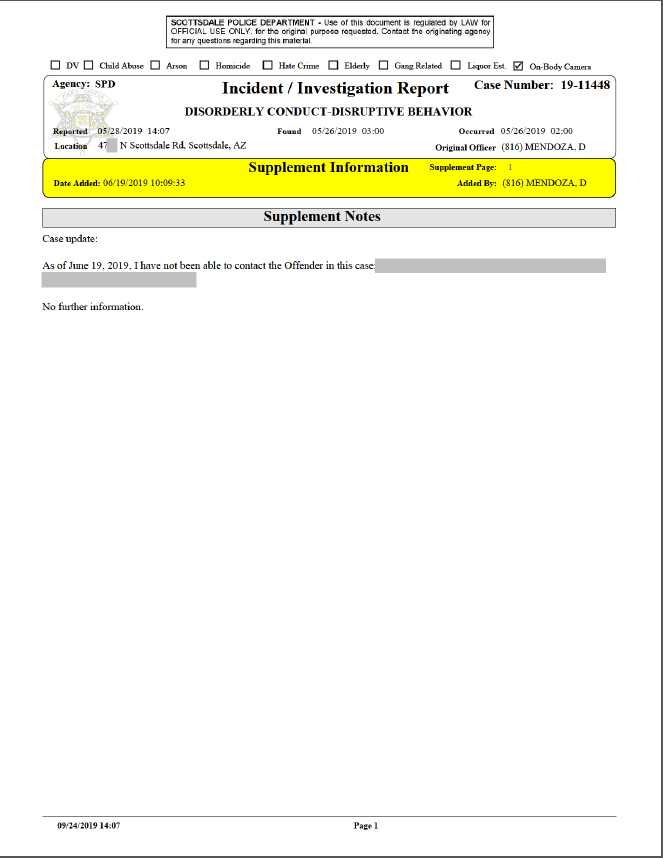