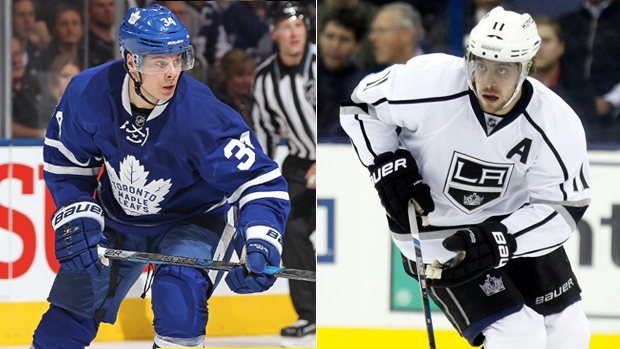 TORONTO – Before he had even been drafted to the NHL, Auston Matthews was fielding questions about Anze Kopitar.

The Toronto Maple Leafs rookie has long been compared to the Los Angeles Kings captain because of their similar playing styles. The two meet for the first time in the NHL on Tuesday night in Toronto.

"That's definitely a player I've always liked to watch and looked at,” Matthews said after the morning skate. “I played against him in a couple tournament games at the World Cup. [He plays] a two-way game, makes plays all over the ice. Good on draws. He’s one of the best players in the game.”

Matthews reminisced about the years he spent watching the Kings when they battled his hometown Arizona Coyotes and how much he enjoyed the intensity of that rivalry. While Matthews has long had an eye on the Kings and Kopitar, the Selke Trophy winner is still getting up to speed on the 19-year-old rookie.

“To be quite honest with you, I haven’t watched him enough yet to really say a whole bunch of stuff,” Kopitar said. “[We’re] both left shots, pretty big body, like to hold on to the puck. His playmaking ability is at a very high level. He’s shown he can score and compete at a high level, so he’s obviously having a good year, but we’re going to try and spoil that tonight.”

While comparisons between the two players are easy to make, Leafs head coach Mike Babcock said Matthews needs to focus on forging his own NHL path.

“I’ve only met one Nick Lidstrom and one Kopitar,” Babcock said. “You’ve got to become your own guy. Work on your skill set, become the best player you can be. I think Auston at a young age is well advanced. He’s got a long way to go and he knows that but he wants to be an elite two-way guy and he’s trying to get better every day.”

The Maple Leafs are riding a three-game winning streak heading into Tuesday night, looking to improve on their 4-1 record at home. Los Angeles has won their last two, recovering from the early loss of goaltender Jonathan Quick by settling down in front of Peter Budaj.

The Kings have allowed 30 or more shots on goal only twice in 11 games, while Toronto has only allowed 30 shots or fewer in four of their 12 contests.

“The reason they do a real good job in the neutral zone is they wear out your defence in your zone,” Babcock said. “They’re a big, heavy team. They turn the pucks over. The other thing they have that lots of teams don’t have is two centres [Kopitar and Jeff Carter] who are number-one centres. Usually you only have one, now you have to worry about two.”

The fact one of Babcock’s own top centres – Matthews – and his line with William Nylander and Zach Hyman hasn’t produced an even-strength point in six games isn’t an area of concern for the Toronto coach.

“I just look at quality of chances,” Babcock said. “Sometimes it goes in, sometimes it doesn’t. When you do good things, good things will happen. [Matthews]' most scoring chances of the year were last game [against Vancouver].”